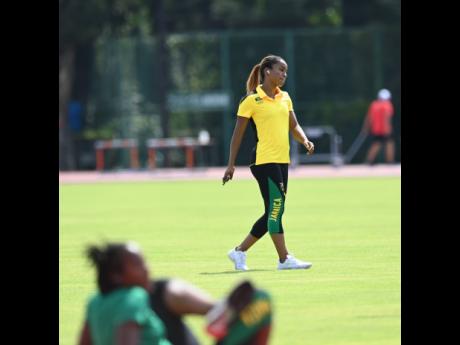 Young Jamaican sprinter Briana Williams is eager to get going in the sprint relays and noted that she holds no grudges after missing out on an individual spot in the 100 metres at the Tokyo 2020 Olympic Games.

“I have no regrets that I am not in the individual event, knowing that I am really in a good relay team,” Williams stated.

The World Under-20 100 and 200 metres champion, Williams finished fourth in the 100m at the National Senior Championships in June, meaning that she had to settle for a spot on the women’s 4x100-metre relay team in what is her first opportunity to represent Jamaica at the senior international level.

She actually qualified for the 100 metres ahead of the 2019 World Championships in Doha, Qatar, but returned an adverse analytical finding after taking medication for the flu, and later withdrew after facing a provisional suspension.

Later, she only received a reprimand, but lost her performances over the period in question, because of the infringement.

Williams told The Gleaner that she was enjoying the Olympic experience, and being around the team in this environment has served as extra motivation.

“There is a lot of motivation,” said Williams. “The experience has been good so far, I really love it. The Village is really nice, I am enjoying seeing other sports and athletes and getting familiar with the place.”

“We just finished some relay practice and so far it’s going really well and I am enjoying it. I am looking for a gold medal, great handoffs and just good execution from everyone,” she said.