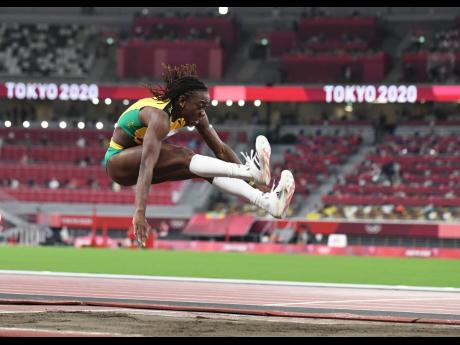 Jamaican triple jump standout Kimberly Williams has targeted a new personal best (PB) in the final of the women’s triple jump at the Tokyo 2020 Olympic Games.

Williams booked her spot to the medal round on her last attempt during qualifying on Friday, landing 14.30m in the sand to advance to her seventh final at the Olympic Games and World Championships levels.

The 32-year-old has been enjoying an impressive season, having registered a personal best 14.69m at the Doha Diamond League meet in May.

“I was on the edge of my seat,” said Williams about the build-up to her last jump recovery. “I don’t know what happened on the first two attempts, things just were not clicking together and I was behind the board.”

Williams had posted 13.38m and 13.86m on her first two tries, way outside the automatic qualifying requirements of 14.40m and outside of the top 12 distances, which also guarantee passage to the final.

“I knew I had one more attempt so I had to draw on my experience after the first two jumps, There is no way I was going to come all this way out here to Tokyo and not make the finals, that was not an option, I had to put things together and make it work,” said Williams.

“I told myself that I’ve been here before. It’s not different from any other meet, I just had to ignore everything and put a good jump together,” she added.

Williams told The Gleaner that she was thrilled with her preparation for the Games, particularly the improvements made to her personal best.

“I’m really excited about how the season is going so I’m looking forward to putting a good series together in the final and getting a new personal best,” she said. “It’s going to take more than my current PB to get on the podium, so I need to bring my ‘A’ game and have fun. It’s a new day, a clean slate, all of those marks that people have jumped already are no longer there. We all start from scratch.”

She shared that as she gets more experienced, she is beginning to have a new understanding and appreciation for the event.

“I think I’m understanding the sport more now, I still love it, it’s still fun and I’m jumping well. I don’t have any injuries and such so I thank the Lord that everything is sound. I want to jump more than 14.69m so I need to stick around and hope that my training can propel me to new heights.”

Williams is the reigning Commonwealth Games champion and has won silver and bronze at the World Indoor Championships. She is still, however, hunting her first medal at the Olympic Games.