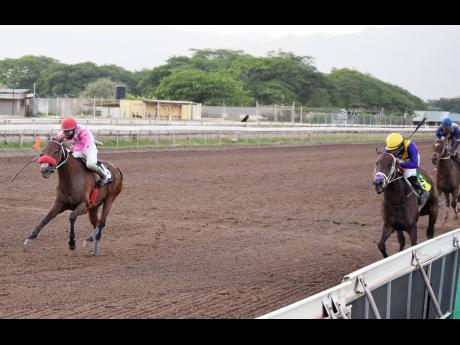 CRIMSON attacked EAGLE ONE from three furlongs out and stayed on determinedly with Robert Halledeen in the straight to repel 11-year-old HOVER CRAFT by a nose, winning in 1:57.1.

NIPSTER finished third, five lengths away, whereas KING ARTHUR, a comfortable winner of the July 3 King’s Plate, beating CRIMSON into third, finished outside the frame in the eight-horse field.

Anthony Thomas continues to dominate atop the jockeys’ standings, booting home a three-timer to go 15 winners clear of Dane Nelson with whom he shared last season’s title.

Thomas opened the 10-race card astride 4-5 favourite, MR LYNDHURST, before returning with consecutive winners, FEARLESS CHAMPION and DOUBLE CROWN, in respective the sixth and seventh events.

Jason DaCosta saddled two winners, FEARLESS CHAMPION and HEART OF THE SEA, both short-priced favourites of the sixth and eighth events, respectively.

Racing continues on Tuesday with the first two-year-old event of the season followed by Saturday’s card, which will feature the Jamaica Derby and fillies-only Jamaica Oaks.