Hurdle heartbreak a lesson for Hyde 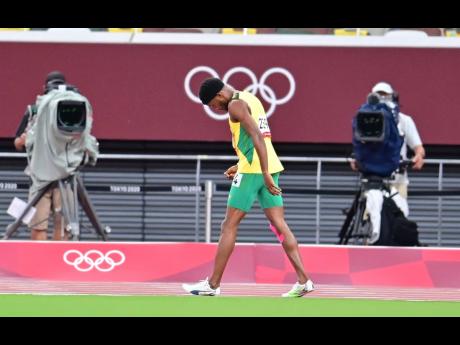 Gladstone Taylor
National champion Jaheel Hyde walks out of the Olympic Stadium in dejection after a tumble in the men’s 400m hurdles event at the Tokyo Olympic Games on Sunday saw him miss a spot in the final.

TOKYO, Japan: National 400m hurdles champion Jaheel Hyde looked well set for a place in the final at the Tokyo 2020 Olympic Games. Powering past opponents, gliding over barriers, turning for home with less than 100m between him and his first...

National 400m hurdles champion Jaheel Hyde looked well set for a place in the final at the Tokyo 2020 Olympic Games.

Powering past opponents, gliding over barriers, turning for home with less than 100m between him and his first Olympic final, things seemed to be going to script for Hyde. He would get his dream and qualify for an Olympic final, after not making past the semi-final at the Rio 2016 Games.

However, he and those dreams went crashing to the Mondo track after a collision with the eighth barrier meant an end to his medal-round ambitions in Tokyo, bringing a disappointing end to a campaign that arrives in the middle of a season that has seen him overcome one obstacle after the next.

A season-threatening injury earlier this year almost derailed his entire programme, but having fought his way back to a personal best and a spot on the Olympic team, Hyde prefers to focus on the positives from his Tokyo 2020 experience.

“I am disappointed, but I have learnt a lot from this season,” Hyde told The Gleaner.

“Coming from injuries and then getting a personal best, I couldn’t ask for anything more. I just have to keep my head up. I am not injured, so hopefully I will have more races after the Olympics.”

The 24-year-old hurdler believes he just didn’t adjust enough in time to clear the hurdle after approaching it faster than he is accustomed to.

“To be honest, if I told you what happened, I would be lying because I really don’t know. It’s just part of hurdling,” Hyde shared.

“I think I ran up on the hurdle too much. It’s the semi-final, chances are I was going much faster than normal, and maybe that caught me off guard.”

Hyde, who is listed as a member of Jamaica’s 4x400m relay pool, said he is at the disposal of the management team, if they decide to use him for the mile relay.

“Well, I was named in the 4x40m pool, so it’s really up to the coaches if they decide and want me to run a leg,” Hyde stated.

Hyde’s personal best of 48.18 seconds was done on his way to winning the title at the National Senior Championships in June.