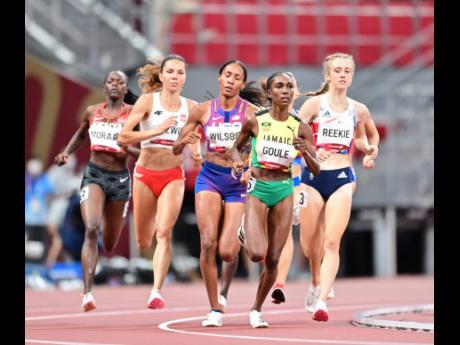 TOKYO, Japan: Natoya Goule is one solid half-mile away from creating Olympic Games history for Jamaica as she looks to become the first from the nation to medal in the 800m when she lines up in the final at the Tokyo Olympic Stadium tomorrow....

Natoya Goule is one solid half-mile away from creating Olympic Games history for Jamaica as she looks to become the first from the nation to medal in the 800m when she lines up in the final at the Tokyo Olympic Stadium tomorrow.

Kenia Sinclair, who finished sixth at the Beijing 2008 Games, is the only other Jamaican to qualify for the final of the women’s 800m at the Olympic Games.

Sinclair herself has backed Goule to medal at Tokyo 2020, and after comfortable wins in her heat and semi-final here, to enter the medal round as a strong contender for a podium spot.

Goule, who struggled with the physicality of the 2019 World Athletics Championships final, finishing a disappointing sixth, says she is prepared for anything in the final, adding that her medal ambition is driven by the impact such a result might have on Jamaica’s middle-distance programme.

“The aim and desire is to get that medal. That’s what I am going for,” said Goule.

“I really think it would make a big difference with the younger ones growing up looking on and thinking that one day they want to be like that and win a medal for Jamaica. I think it would also help to change the mindset of others about Jamaica, knowing that we have good middle-distance runners, just like how we have a lot of throwers and jumpers, in addition to our sprinters.

“I think we have good middle- and long-distance runners in Jamaica, but I don’t think people want to take on the challenge. You have to have a very strong mind to train for the 800m because it’s really hard,” added Goule

The 27-year-old says she was overwhelmed with emotion when she realised that she had booked a spot in her first Olympic final.

“To tell the truth, I had to take a minute to take it in,” she said. “I am in my first Olympics final in my first Olympics, and I was so emotional and so happy because anything can happen in the final. It’s just one more job left, and I am really excited.”

The PanAm champion says she is physically and mentally prepared to run her race as she intends regardless of what approach is taken by the others.

“When it comes to an 800m race, a distance race, or any race for that matter, you can go in the race and say you are going to run a certain way, but it never really happens,” she said. “Right now, I’m not thinking about that. If the race goes out fast — and I know it might go out fast because Athing Mu likes to get out - I am prepared for that. I am prepared for anything. If it goes slow, I can take care of it, and if it goes out fast, way better.”

Also tomorrow, Ronald Levy, the national champion, as well as Damion Thomas and Hansle Parchment will line up in the heats of the Men’s 110m Hurdles, starting at 7:10 p.m. (5:10 a.m.).

Carey McLeod will look for better results in the triple jump qualifiers at 9:00 a.m. (7:00 p.m. Monday) after failing to make it to the long jump final, while the Women’s 400m trio of Stephenie-Ann McPherson, Candice McLeod, and Roneisha McGregor will start their competition at 9:45 a.m. (7:45 p.m. Monday).