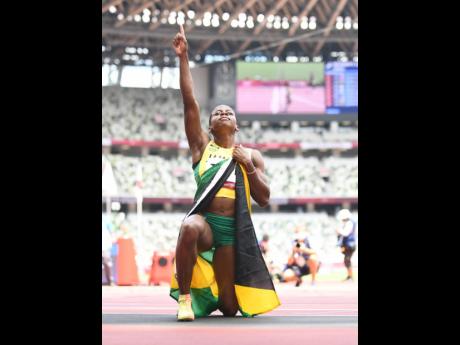 Gladstone Taylor
Megan Tapper celebrates after claiming Jamaica’s first ever medal, a bronze, in the Women’s 100m Hurdles event at the Tokyo Olympic Games in Tokyo, Japan, on Monday.

Megan Tapper earned Jamaica its first ever medal in the Women’s 100m Hurdles at the Tokyo, Olympic Games, in Tokyo, Japan, on Monday morning.

Tapper said she had jitters, given the pressure on her to deliver for the country, but credited her faith in God for her success.

“I was nervous, like extremely nervous as expected,” Tapper told The Gleaner. “This is an Olympic final, but I just asked God to show up for me, and that He did. I went out there, and I got a good start. I didn’t get left in the blocks, and I just kind of maintained the focus and did the best that I could in the middle of the race and ran. Did my Veronica Campbell dip to the finish line. I mean, it got me a bronze medal, so I’m grateful!”

Tapper’s compatriot, Britany Anderson, competing in her first Olympic Games, was also in the final, however, she placed eighth.

Another Olympic Games debutant, Tajay Gayle, the long jump World Champion, also competed in the Men’s final of his event. However, a knee injury, which plagued him since the semi-finals, prevented him from showing the kind of quality he is able to produce as he was only able to cut the sand at 7.69m for 11th place. Greece’s Miltiadis Tentoglou jumped 8.41m for gold, and Juan Miguel Echevarria (8.41m) and Maykel Masso (8.21m) gave Cuba a silver and bronze medal, respectively.

World Championships silver medal winner Shanieka Ricketts arrived at the Tokyo 2020 Olympic Games with her name pencilled in for a medal after a season that saw her tease the 15m mark with a new 14.98m personal best and big performances on the circuit.

However, a few early hiccups and an inspired Ana Peleteiro, of Spain, who posted a personal best 14.87m on her penultimate attempt, saw the Jamaican finish fourth with a best effort of 14.84m, which she managed on her fourth try.

The gold medal was won by Venezuelan star Yulimar Rojas, who smashed the 26-year world record (15.50m) with a 15.67m mark on her final attempt. Silver went to Portugal’s Patricia Mamona in a national record 15.01m while the other Jamaican in the event, Kimberly Williams, had to settle for eighth with 14.51m.

“I definitely wanted a medal, of course. I am disappointed. I had a few run-up problems in the first two rounds, and I had to play catch-up, and the competition got away from me, and I just have to work with the fourth place. I can’t do anything else,” Ricketts stated.

“I had a good season. I kept getting good jumps. I had a good jump tonight as well, but I had two fouls over 15m, but those, of course, didn’t count, but I just have to move on and try to improve throughout the rest of the season,” she added.

Ricketts, who shared that she had been registering 15-m jumps in practice, shared that it was a let-down for her not to be able to replicate those in the final.

“I am very disappointed because based on where I am in the season, I definitely feel I should be over 15m on paper,” she said. “It’s still early, but I will definitely be watching the film, see where I went wrong and see what I can adjust going into the rest of the season as well as next year.”