Warholm has to earn it 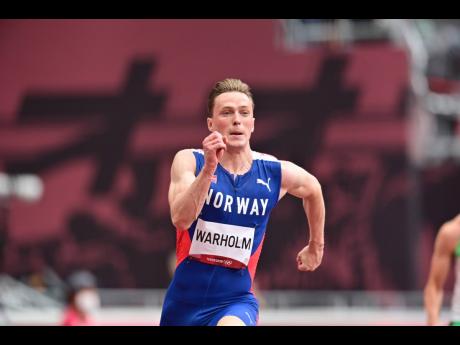 Gladstone Taylor
Norway’s world record holder Karsten Warholm during Round 1 of the Men’s 400m Hurdles at the Olympic Games in Tokyo, Japan, on Friday.

When Karsten Warholm of Norway broke the 29-year-old world record in the 400m hurdles, he affirmed a prediction made two years ago by Jamaican coach Okeile Stewart. However, even though Warholm has won the last two World Athletics Championships gold medals and now owns the record – 46.70 seconds – Stewart says he is not a certain winner of the gold medal at the Olympic Games in Tokyo, Japan.

Stewart, who coached Rushell Clayton to the bronze medal at the 2019 World Championships in the women’s 400m hurdles, says Rai Benjamin, the American who was second to Warholm in 2019, fast Brazilian Alison dos Santos, and Commonwealth Games champion Kyron McMaster of the British Virgin Islands are formidable rivals.

Asked if the fast Norwegian was sure to win the Tokyo gold, Stewart reasoned: “I would not say yes. I think he has all the reason to believe the gold medal should be him. I’ve watched Benjamin run. I’ve watched Santos run. I’ve watched McMaster run, and I’m saying that if they turn up in the shape that they are in right now, it’s going to be a competitive race.”

Warholm and Benjamin both won their first-round races in Tokyo on Day One of the track and field competition, with the Brazilian close behind 2019 bronze medallist Abderrahman Samba of Qatar in his heat.

Warholm defeated Benjamin and Jamaica’s 2017 World Championships finalist Kemar Mowatt in the first semi-final yesterday. Samba, the third-fastest man in history at 46.98s was defeated by dos Santos in their semi-final, which also included Jamaica’s Shawn Rowe, who had a personal best of 48.83s but finished sixth. National champion Jaheel Hyde led for the majority of the third semi-final but a trip over a hurdle just after the final curve meant that McMaster, first and third at the 2016 World Under 20 Championships, was victorious.

Warholm heads the 2021 world-performance list, with Benjamin second with his US record 46.83s, and dos Santos third fastest at 47.34 seconds, but Stewart is adamant that the super Norwegian has to run.

“Anything can play. It’s a hurdles event, and you just have to be the person that you want to be on that day to strike gold,” he said.

Jamaica won two silver medals in this event at the Olympics, thanks to Winthrop Graham in 1992, and Danny McFarlane in 2004.