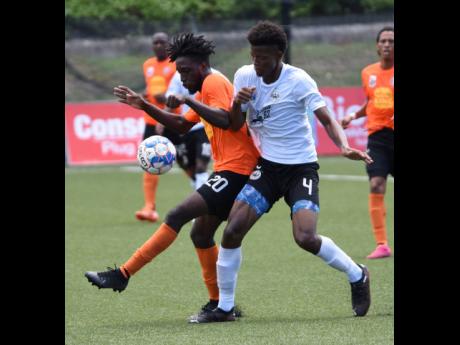 Tivoli Gardens FC head into their Jamaica Premier League (JPL) football game against Harbour View FC with great hopes of adjusting their recent winless form, in a contest at the University of the West Indies (UWI) Captain Horace Burrell Centre of Excellence that is set to begin at 1:00 p.m.

In the day’s other game, Humble Lion FC will face Molynes United FC at 3.30 p.m.

Tivoli have registered two draws and a defeat in their last three games, scoring just one win in their five JPL matches this season.

Coach Philip Williams said scoring has been an issue for his team, as they have not scored more than one goal in any game this season. He said they need to start finding the net more regularly, if they are to give themselves a chance at the play-offs.

“We are playing well and creating chances, but we are not scoring in the games,” Williams told The Gleaner.

“In order to give ourselves a chance, we definitely need to convert the chances we are creating. If we do that we should be set for top six,” he commented.

Tivoli sit eighth in the JPL standings with six points. A win this afternoon would lift them to fourth.

With six matches to go, Williams pointed out that they have played the tougher teams already and now it is time for his team to put in a good run.

Harbour View, who were flying in the early rounds, have also hit a snag over their last two matches, with a loss and a draw. Although the ‘Stars of the East’ have been able to maintain their top-three placing, as they stayed third on nine points, coach Ludlow Bernard is aiming to get back to winning ways.

In the day’s other fixture, Humble Lion and Molynes United square off in a bottom-of-the-table clash. Both teams have three points each, with Molynes ahead on goal difference.

However, while Molynes’ points have all come from draws, Humble Lion stopped a five-match losing streak with their first win of the season last week, when they beat Waterhouse.

Senior midfielder Andrew Vanzie, who got both goals in that game, said the team is looking to push on from that result.

“The win has boosted the players a lot,” Vanzie said. “They are pumped and ready to play Humble Lion football.

“On Saturday we have our next game against Molynes and we need to continue where we left off. We got three points last week, so we are going to push on from there and build on what we have and move forward,” he added.

Having failed to take maximum points from any of their six matches this season, the Anthony Patrick-coached Molynes – who have also lost three matches – will probably see this as their best opportunity to get off the mark.