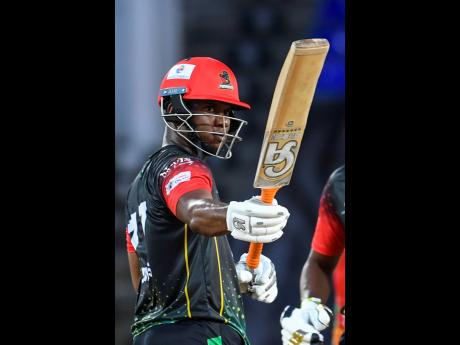 Opener Evin Lewis hit his third half-century of the campaign to pass 400 runs, as St Kitts and Nevis Patriots romped into only their second ever Caribbean Premier League final with an emphatic seven-wicket victory over Guyana Amazon Warriors here yesterday.

Asked to complete their highest run chase of the tournament in the second semi-final, Patriots did so in a canter, overhauling a target of 179 with 13 balls to spare at Warner Park, to book their place in today’s final at the same venue against St Lucia Kings.

Lewis, coming off a hundred in his last outing four days ago, punched three fours and eight sixes in an electrifying 29-ball unbeaten 77 to spearhead the run chase.

Crucially, Lewis put on 76 off 44 deliveries for the first wicket with veteran Chris Gayle, who equalled his best score of the tournament with 42 off 27 balls, before adding a further 88 for the second wicket with captain Dwayne Bravo, whose 34 required 31 balls.

HUNGRY TO DO GOOD

“I was hungry to do good. That match I took off I actually wanted a little rest because I had a few niggles,” said Lewis, who missed Patriots’ last preliminary round game on Sunday.

“So I just got a bit of rest and came back strong today.”

Shimron Hetmyer had earlier struck an unbeaten 45 off 20 deliveries as Amazon Warriors raised 178 for nine off their 30 overs, after choosing to bat first.

“The plans were simple. I made it clear to the team that both teams have talent and we have to try and out-think them,” said Bravo.

“It was a pressure game. We have a lot of experience in our dressing room and we know we wanted to chase and I know they wanted to bat first.

TOP OF THE ORDER

“At half-time, we were happy. We felt comfortable in the dressing room and again, Evin Lewis showed his class along with Chris at the top of the order. They literally batted [Amazon Warriors] out of the game.”

Hemraj anchored the top order, posting 33 for the first wicket with King, 26 for the second with Shoaib Malik (6) before adding 29 for the third with Pooran, who blasted a four and three sixes in a 14-ball cameo.

When Hemraj played down the wrong line and was bowled by Jaggesar in the 12th over at 95 for four, it was left to Hetmyer to marshal the innings, the left-hander punching two fours and four sixes – three of the maximums coming in the 20th over from left-arm speedster Sheldon Cottrell which cost 25 runs.

In reply, Lewis and Gayle stunned Amazon Warriors in a pulsating opening stand, the first power-play leaking 68 runs without yielding a wicket.

Gayle, who has struggled for runs and still only averages 20 for the tournament, lashed five fours and three sixes before finally perishing in the eighth over, holing out to Hetmyer in the deep off off-spinner Kevin Sinclair.

Promoting himself to number three, Bravo arrived to punch three fours and a six and by the time he and Fabien Allen (0) fell in the space of three deliveries in the 16th over, victory was already assured.

“It’s a tough loss. It was difficult today, especially putting up our best score in the tournament,” Pooran said.

“I think as a bowling group today we didn’t turn up. Experience won today and I just feel as if the moment was too big for our bowlers.”