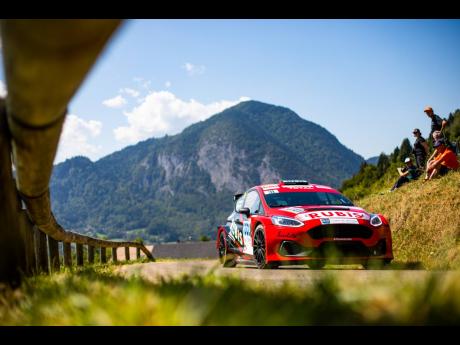 Jamaica and Caribbean rally champion Jeffrey Panton had a bittersweet experience recently, after taking part in Rally Mont Blanc in Morzine, France. Panton was among 44 drivers who had to retire from the two-day event after his new Rally two Ford...

Panton was among 44 drivers who had to retire from the two-day event after his new Rally two Ford Fiesta veered off the road on the 12.40km stage six in Draillant Fessy on day one.

“It started to rain and there was a corner that we approached that had a lot of gravel from the other cars that had cut the corner and left a lot of debris on the road,” Panton told The Gleaner. “When we hit that corner, we hit a lot of the dirt and we sped off into the forest and were stuck for close to five hours.”

The incident ended Panton’s participation in the French rally, but he said the experience was worth the trip and getting a chance to test his new car.

“The car itself is great and handling very well,” he said. “The set up from the guys in France was well done and as for the rally itself, we knew it would have been tough, but we went for the experience and we are glad for that.”

Over 300 participants took part in the rally which eventually was won by the French team Yoann Bonato and co-driver Benjamin Boulloud in an overall time of 1:43:14.2 hours.

The seat time gained from Panton and co-driver Mike Fennell Jr has encouraged the reigning Caribbean champion to take on more European events in preparation for the Caribbean rally season next year.

Panton is set to compete in a rally event in Ireland in November, and another meet in the United Kingdom later in the year. Panton’s Ford Fiesta is expected on the island in December.

With the new Rally two-class expected to be contested on its own in Barbados next year, Panton is hoping to be fully ready for the competition, which he expects in his bid for the title.

“There are about 10 other Rally two cars in Barbados now,” he said. “They have introduced a championship for that private class, so we hope to be ready and certainly, we will be up there with them next year.”