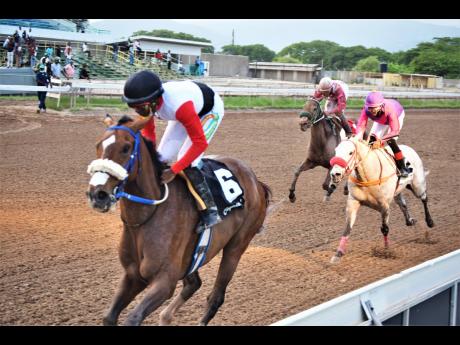 MONEY MONSTER delivered on his recent hint of returning form, blowing past ROY ROGERS on the home turn to outclass rivals in the Kenneth Mattis Memorial at nine furlongs and 25 yards yesterday.

Having found the opposition tough, amid training setbacks, after stepping up to overnight allowance company in April, MONEY MONSTER had shown glimpses of a return to form, finishing second behind LOOSE BALL at five furlongs straight two Saturdays ago.

The four-year-old gelding confirmed his fitness with a sharp seven-furlong gallop last Friday morning, which he reproduced with a sweeping move, motoring from fourth position three furlongs out, to leave long-time leader ROY ROGERS in his wake.

Pushed out by Omar Walker, who had partnered him for his second-place run over the straight, MONEY MONSTER stayed on strongly to win by two and a quarter lengths, clocking 1:54.4 ahead of a game ROY ROGERS.

Top-claiming jockey Oshane Nugent celebrated his second day back from suspension with a two-timer, booting home PRIMAL FEAR and NAKAMURA in the fourth and ninth races, respectively.

Lawrence Freemantle saddled a big double on the 10-race card, striking with 37-1 outsider LION TALK in the eighth, topped off by 3-2 favourite NAKAMURA in the following event.