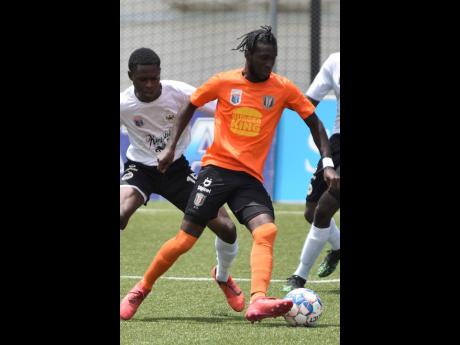 Vere United go into today’s Jamaica Premier League (JPL) quarterfinal match against former winners Tivoli Gardens, knowing that they have never beaten the west Kingston-based club in their three seasons in the top-flight. However, both coaches...

Vere United go into today’s Jamaica Premier League (JPL) quarterfinal match against former winners Tivoli Gardens, knowing that they have never beaten the west Kingston-based club in their three seasons in the top-flight.

However, both coaches believe that history will count for very little when the two teams clash this afternoon at the UWI-JFF Captain Horace Burrell Centre of Excellence at 2.30.

Tivoli coach Philip Williams, however, said that the Vere (formerly Jamalco) teams of the 2016-17 and 2019-20 seasons, are not the same as the team now coached by Donovan Duckie this term. Tivoli won the only meeting between the teams this season, but Williams declared that they have a lot of respect for the Clarendon-based outfit and expect another tough match from them.

“This is a new Vere team with a new set-up and a new coach, so the history speaks for very little. The win we got over them in the regular season counts for nothing now.

“We are not thinking about that win. And we are not looking at the previous seasons we had the better of them,” he said.

“This is the playoffs. There is a lot more at stake to move on to the next phase. So we are preparing for Vere like we have never met before.

“So definitely we expect a very good game over the two legs,” he stated.

Williams added, however, that they intend to set the tone of the two-way tie from the first game.

“It is very important to make a statement in the first leg. The way you come out of the first leg will set you up for the second leg,” he said.

Meanwhile, Duckie said past results usually have very little bearing at this stage, and his team is ready to challenge for the top prize.

“This is the top six and we (Vere) are not here to participate. Your chances of winning the league are realistic once you are here.

“We have 100 per cent respect for our opponents, but what we have to do now is execute properly. So the mindset is to put our best foot forward and see where the results fall,” he said.

“This is a quarterfinal, and our players know exactly what they have to do to get a result to matriculate into the semi-finals. What we are building at Vere is something special,” he added.

Vere boast the best defensive record in the league with seven conceded from the 10 games, and they will look to captain Ricardo Campbell Alton Lewis, Kenroy Lumsden, and goalkeeper Kadeem Davis to keep things tight at the back while Romaine Plummer, Ricardo Messam, and Tyrese Harrison will lead the attack.

Tivoli will rely on captain Barrington Pryce to marshall their defence and will look to Devroy Grey, Horatio Morgan, and Asprellia Alexander to provide the goals.