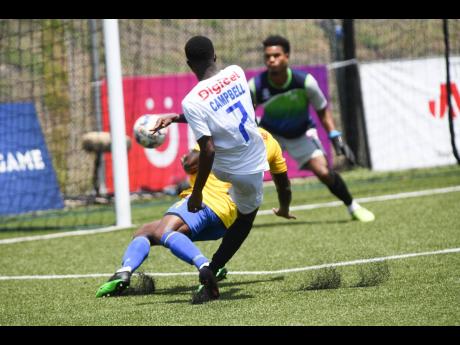 If Harbour View are going to find a way to the Jamaica Premier League semi-finals, they may have to do it without Head Coach Ludlow Bernard on the touchline.

Bernard’s half-time ejection compounded a frustrating afternoon for the ‘Stars of the East’, as they were beaten 3-1 by Mount Pleasant Academy in their quarter-final first-leg match at the UWI-JFF-Captain Horace Burrell Centre of Excellence yesterday.

Devonte Campbell opened the scoring for Mount Pleasant with their first shot on target in the 30th minute, while Kesslon Hall and Jourdain Fletcher added goals in the 55th and 75th minutes, respectively.

While Harbour View had the majority of the chances, it was Mount Pleasant that got on the board first through the teenager Campbell.

Down a goal at half-time, the team’s situation was changed with Bernard’s ejection.

Assistant coach Sean Fraser said that the sending off was because Bernard was accused of spitting at the fourth official, an allegation that Fraser strongly denied.

“The coach was drinking some water and then he spat the water out and the fourth official said that he spat at him. But for me personally, he didn’t do that,” Fraser said “Coach was walking normally because I was with him so I thought it was a little bit harsh. He could have called the referee and said ‘talk to this man’ instead of showing him a red card.”

It is a decision that Fraser said they will be looking to overturn.

However, Fraser noted that this was not an excuse for his team’s defensive effort or their inability to capitalise on the many chances that fell their way.

“As a player, as a coach, you see your coach get a red card for whatever reason. Obviously it’s going to play some part, but no excuses,” Fraser said. “Defensively, we weren’t tracking back, we weren’t marking properly.”

Harbour View had defeated Mount Pleasant in the regular season 2-0 in July and their all time head-to-head was in their favour with four wins from their previous seven meetings.

But it was Mount Pleasant who got some measure of vengeance with the win, although Technical Director Walter Downes was more satisfied with their performance, with the team now scoring eight goals from their last two games.

“Every game is different. We did a good, professional job today. I think we are on the front foot now. We got a 100 per cent record of shots (on target) today. Three shots, three on target,” Downes said. “That is not going to last forever, but I thought we made some good opportunities getting into the final third.”

However, Williams’ late goal still provides a lifeline for Harbour View to mount a response, with Fraser confident that they can make up the two-goal deficit.

“We can definitely do it. This is Harbour View. We are a championship team and we are going to work on it,” Fraser said.

Despite their two-goal advantage, Downes says that their attacking approach will not change.

“We won’t be protecting our lead. We will come out as we always do, looking to win the game,” Downes said.

The second leg will take place on Wednesday.