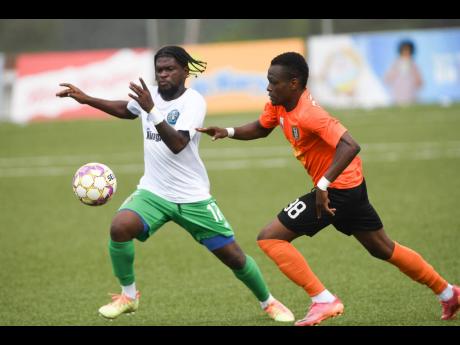 Vere United’s Jamaica Premier League (JPL) playoff debut must have left them bewildered as they somehow left the UWI-JFF-Captain Horace Burrell Centre of Excellence without goals and a first leg quarter-final win yesterday.

Tivoli Gardens (TG) would be harbouring similar sentiments in their postseason return as a lack of finishing highlighted both teams’ frustrations, as they had to settle for a 0-0 in their quarter-final showdown.

In a game where chances were at a premium, Vere United had difficulty creating clear opportunities in the first half, with Tivoli Gardens posing a greater threat in the final third.

Vere’s Head Coach Donovan Duckie admitted that nerves played a factor in his team’s first playoff game but says that his team will have to adapt quickly if they want to secure a spot in the semi-finals.

“There were butterflies in the changing room for most of the players. They have not achieved this (the playoffs) before. The entire parish of Clarendon is riding on their back,” said Duckie, “It’s for them now to adapt to this stage and understand that this is not regular season football. This is a battle for the cup.”

“If you want something more than I want it, then you have a head start over me. So we have to want it as badly as they want it. Then the quality will separate us.”

That quality was missing among Vere’s attackers, who wasted two chances in the second half to take the lead and an advantage heading into the second leg.

Three minutes after the restart, Tyrece Harrison was put through on goal, one on one with Tivoli Gardens’ goalkeeper Kewong Watkins, but he could find no way around the custodian, who stood firm, blocking the chance and forcing a corner.

Minutes later, Vere were again knocking on the door when a low cross would find a wide open Ramone Plummer, who, instead of tapping home from close range, somehow managed to put his effort over the bar.

Tivoli weren’t without their moments, as a free kick from second-half substitute Jermaine Johnson forced a save from Vere’s Kadeem Davis, as they hunted the advantage in their first playoff match in three seasons.

Tivoli’s Head Coach Philip Williams was proud of his team’s efforts, but lamented the finishing problems that have plagued them all season.

“I can’t fault them today for the amount of chances they got. I think we were not productive enough. They (Vere United) could have said the same in terms of letting us off with the chances they created,” Williams said.

Compared to Vere’s postseason jitters, Williams felt his team played with good intensity and believes that finishing will be the key in deciding Wednesday’s return leg.

“Tivoli has a rich history. These guys are used to winning. It wasn’t an occasion that was beyond them. They have the mental sense for this occasion and they were ready,” Williams said