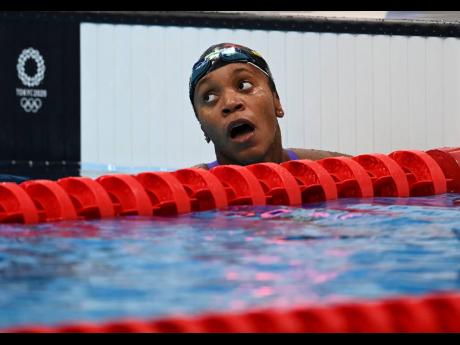 Gladstone Taylor
Alia Atkinson in competition at the Tokyo Olympics.

ALIA ATKINSON may be about to retire from competitive swimming, but she still craves peak performance. Atkinson is currently engaged in the International Swimming League (ISL) in Napoli, Italy, and is aiming to get close to her World short course...

ALIA ATKINSON may be about to retire from competitive swimming, but she still craves peak performance. Atkinson is currently engaged in the International Swimming League (ISL) in Napoli, Italy, and is aiming to get close to her World short course records in the 50-metre and 100-metre breaststroke.

The 32-year-old started with a 50-/100-metre breaststroke double on September 2 and 3, clocking 29.73 seconds in the shorter event. However, as was the case with her last year, she is accelerating as the League season continues.

“I seem to be around where I was last year. Hopefully, with more competition and training I can get close to my world-record times,” she evaluated after her most recent swim in Napoli.

Her records are 28.56 seconds for the 50-metre breaststroke and 1:02.36 for the 100-metre version, a mark she shares with Lithuanian Ruta Meilutyte.

Given that she peaked toward the end of the 2020 ISL season in Budapest, Hungary, her hope might not be too farfetched. In Budapest, she finished with times of 28.88 seconds, and one minute, 02.66 seconds.

The Jamaican learnt a lot from her teammates in Budapest and is now sharing her experiences with the next generation of Caribbean stars.

“This time it feels like I am giving back to the younger generation. I am one of the oldest swimmers in the league, and it is great to see so many young swimmers continuing on professionally. We have two other Caribbean swimmers here; from Trinidad and Tobago, Dylan Carter, and Bahamas’ Joanna Evans,” she replied.

“So I like where we are heading as a sport, and love to share my knowledge with the younger swimmers when I can,” she intoned.

Carter, 25, won the silver medal at the 2018 Commonwealth Games in the 50-metre butterfly and triple gold at the 2018 CAC Games. Evans, a 24-year-old freestyle swimmer, competed at the Tokyo Olympics.

Asked if Napoli feels like a farewell tour, or if she feels revved up, the double world-record holder replied: “Both. I feel like my swimming career has come full circle, but I also want to finish it with a great performance if I can.”