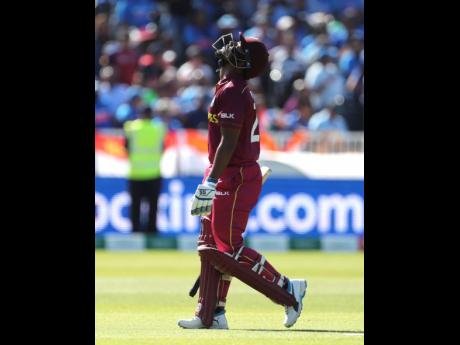 Twenty20 World Cup-bound West Indies pair of Nicholas Pooran and Fabian Allen starred for all the wrong reasons in a final-over drama that ended with Rajasthan Royals clinching a thrilling, two-run victory over Punjab Kings in the Indian Premier League (IPL) yesterday.

In an unbelievable final over from Kartik Tyahi, the Royals held their nerve until the end in the face of 67 from Mayank Agarwal and cameos from Kings captain KL Rahul, South African import Aiden Markram and Pooran, defending a target of 186 at the Dubai International Cricket Stadium.

Kings were in a favourable position, needing four from the final over from Tyahi, with Pooran and Markram entrenched in a half-century stand, but it all unravelled after the Proteas opener took a single off the second ball.

Tyagi put on a bowling master class, picking up the scalps of Pooran and Deepak Hooda, both edging to the ‘keeper, and Allen failed to connect on the full, wide last ball and Kings staggered over the finish line.

Earlier, Ishan Porel, England leg-spinner Adil Rashid and Markram made their IPL debuts after receiving their Kings caps, and left-handed West Indies opener Evin Lewis made his debut for Royals.

Royals, sent in to bat, were off to a cracking start, with Lewis and Yashasvi Jaiswal going after the Kings bowlers with impunity, bringing up 50 inside five overs.

Arshdeep Singh, whose 5-32 was a career best, broke the stand in the final over of the power play, dismissing Lewis for 36.

Porel returned for a second spell in the eighth over and claimed Sanju Samson for four when Rahul grabbed a one-handed stunner.

Jaiswal and Liam Livingstone steadied the Royals with a stand of 48 from only 28 balls to take them past the 100 mark.

Allen took a sensational diving catch near the ropes off Arshdeep to get Livingstone for 25, and nerves overcame Jaiswal approaching his half-century; he fell for 49 to Harpreet Brar.

Left-hander Mahipal Lomror carried the fight for the Royals and hammered 24 in the 16th over, creaming two sixes and two fours off Hooda.

But India pacer Mohammad Shami and Arshdeep joined forces and pulled things back, and causing the Royals to lose their last six wickets for 19 and were bowled out for 185.

In the chase, Rahul rode the good fortune of three reprieves and made 49, becoming the second-fastest batsman to score 3,000 IPL runs, and Agarwal slammed seven fours and two sixes off 43 balls in a solid start of 120 for the Kings.

Agarwal crossed the 2,000-run mark in the IPL, and Rahul returned the favour to the Royals when he hammered Chris Morris for 25.

Royals managed to dismiss the Kings’ openers in the space of two overs, and the match remained on the edge before Tyagi defied the odds in the final over.