Capitals too much for Holder and Sunrisers 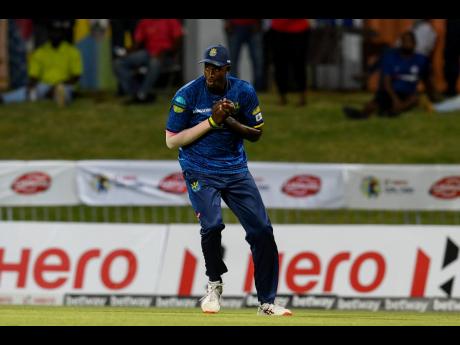 Randy Brooks - CPL T20
Jason Holder in action with the Barbados Royals during the Hero Caribbean Premier League in St Kitts and Nevis on August 26.

A day that started under gloom for Sunrisers Hyderabad got worse when Delhi Capitals put on a clinical show and cantered to an eight-wicket win in the Indian Premier League (IPL) yesterday to move to the top of the points table.

Sunrisers were up at the crack of dawn undergoing PCR testing after pacer Thangarasu Natarajan tested positive for COVID-19 and entered isolation with six others.

Former West Indies captain Jason Holder and all-rounder Sherfane Rutherford from Guyana were among the rest of the squad that were cleared to play the match at the Dubai International Cricket Stadium later in the day.

Holder made only 10 in Sunrisers 134 for nine and went wicket-less in 3.5 overs that cost 33. Rutherford did not play.

The Capitals bowlers and India internationals Shreyas Iyer, Shikhar Dhawan and captain Rishabh Pant came to the party and led their side to victory.

Chasing 135 to win, the Capitals were off to a flying start from Dhawan and fellow India international Prithvi Shaw.

But Sunrisers made the breakthrough in the third over when their captain, Kane Williamson, took a stunning running-catch off Khaleel Ahmed to dismiss Shaw for 11.

Iyer and Dhawan took the Capitals to 39 for one at the end of the powerplay, with the two batsmen scoring at a decent pace and completing a half-century stand in the 11th over.

Afghanistan international Rashid Khan broke the stand in the same over when claimed Dhawan for 42 after Abdul Samad took a good catch at deep square leg.

Pant, not out on 35, and Iyer, not out on 47, then joined forces and made sure the Capitals continued their charge, putting an unbroken, 67-run stand to their side home with 2.1 overs to spare.

Earlier, Sunrisers suffered an early setback when Australia opener David Warner was caught at point in the first over off South Africa pacer Anrich Nortje.

Sunrisers stuttered to 29 for two when India wicketkeeper-batsman Wriddhiman Saha fell for 18 to Kagiso Rabada, Nortje’s South Africa teammate, in the fifth over.

Manish Pandey and Sunrisers captain Kane Williamson took their side past 50 before the New Zealand international captain got two reprieves – one each from Pant and Shaw.

But that did not cost the Capitals much as Williamson got out with West Indies batsman Shimron Hetmyer holding on to a catch in the deep off Axar Patel.

Capitals continued to chip away, and Sunrisers lost their last seven wickets for 74, with Rabada ending with 3-37 and Anrich Nortje and Axar Patel taking two wickets each.