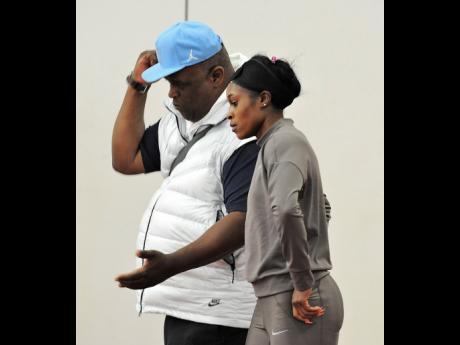 Sprinter Elaine Thompson Herah (right) receives instructions from her coach Stephen Francis during a training session at the Alexander Stadium in Birmingham, England, in February 2018 ahead of the IAAF World Indoor Championships.

In a shocking development, Francis was coy about Thompson Herah's possible departure amid reports that the sprinter declared her intention to leave in a message to the organisation.

Francis has guided Thompson Herah for all of her career, culminating in a 2021 season that saw the 29-year-old sprinter repeat her Rio 2016 feat by winning gold in the 100m and 200m at the Tokyo Olympic Games.

“In short, I would not be surprised if she [Thompson Herah] is not here. I don't know if she is going to be here but neither do I for anybody else in her situation,” Francis told RJRGLEANER.

“What I can tell you is that I am not in the habit of revealing communication which occurs between me and my athletes so I can't comment on that, but I would suggest to you that if you have heard that and you believe it and you want to find out, then the best person is her because from my perspective we start back practice sometime in October, just after Heroes weekend and my philosophy is usually to see who turns up.

“So, in summary, I can't tell you what Elaine has said to me or what I have said to her, and secondly, if she tells you that this is her plan, then I will sit and see what happens in the middle of October,” Francis added.

“What my experience tells me is that athletes in general, especially those who come from a low expectancy level, in other words, not much was expected of them, they are usually unable to separate themselves from the people who hop unto their various bandwagons. They tend to have short memories and they tend to listen to people they just meet or who have been around them since they became successful or famous and they usually, from my experience, have a very great influence. It takes a smart and strong athlete to sit back and say 'you guys weren't around so leave me let me make my decision',” Francis continued.

The famed coach also spoke about his relationship with Thompson Herah.

“I don't think the relationship has been any different, any better or any worst than usual. One of the problems that usually happen in MVP, our approach to training, to coaching, to the development of athletes, is far different to what persons are accustomed to. We have a large number of top-class athletes and we usually have a large number of developing athletes and sometimes an athlete finds it hard to reconcile when they hear of their fellow competitors talking about their coaches calling them and their coaches do this and that. Being successful, you tend to want to see those types of things happen to you and again the athletes lose focus on what their accomplishments are and focus on things that I would call at best frills. So we do have problems with those people who do not like to be around competition in their camp,” Francis stated.

Thompson Herah this season lowered her personal best time to 10.54 seconds in the 100m – a time bettered only by Florence Griffith-Joyner's 10.49 seconds and improved her 200m best to 21.53 seconds.

There have been reports of discontent between Thompson Herah and the MVP Track Club for some time, stemming from an incident that took place during a training session before the start of the season involving a masseur, Thompson Herah and her husband Derron Herah.

It is understood that Derron Herah is likely to take over coaching responsibilities for the athlete.