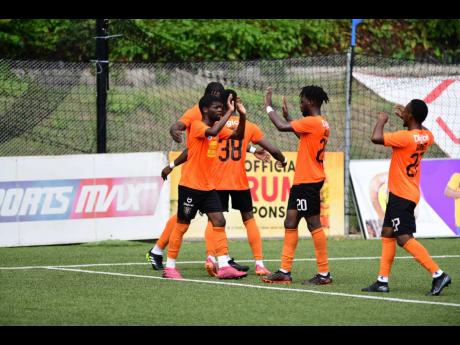 Tivoli Gardens Technical Director Glendon ‘Admiral’ Bailey said his coaching staff got their plans right for the team to peak at the right time of the Jamaica Premier League.

Goals from Stephen Barnett (18th), Trayvon Reid (62nd), Horatio Morgan (66th), and Jermaine Johnson (90+5) gave the west Kingston side a 4-0 win over Vere United yesterday. It happened in the second-leg quarterfinal, which they took 4-0 on aggregate at the UWI-JFF Captain Horace Burrell Centre of Excellence.

Bailey, who was absent on the sidelines for the majority of the season, turned up yesterday to provide extra motivation for his team.

“It makes no sense you peak too early and then when you reach this stage, you start to go down,” he told The Gleaner. “So we planned it perfectly – to start our move at the right time – and that has enabled us to play the way we are playing now.

“And the way we have been playing, we should be scoring more goals more frequently. However, we did a lot of background work, and it paid off, and this has built the club and players’ confidence and let them know we can score goals.”

Both teams started brightly, but it was Vere who had the first real opportunity after 12 minutes, but Ricardo Dennis put his effort wide.

Minutes later, Tivoli’s Reid and Trevaune McKain got in each other’s way on a great chance.

Barnett put Tivoli ahead when he redirected Devroy Grey’s past Kadeem Davis.

Vere also had chances through Tyrese Harrison and Ricardo Messam late in the half.

However, after the break, Tivoli ran over their opponents, with Reid outrunning the Vere defence and slotting home to make it 2-0.

Horatio Morgan added a third in the 66th minute when he was left unmarked on a corner kick. Johnson completed the win from the penalty spot in time added.

Vere United coach Donovan Duckie said his team did not react the right way after going behind.

“We started good and had a good plan, but we have to be more competitive and more professional,” he said. “We have to give a better reaction. We cannot stop playing.

“But we have created a good foundation to add players to, and the intention is to improve.”

However, Jourdaine Fletcher continued his red-hot form and netted his fifth goal of the season to secure the 1-1 result and 4-2 aggregate win for the St Ann club.

In the semi-final on Saturday, Waterhouse will oppose Mount Pleasant Academy, while in the other game, Cavalier go up against Tivoli Gardens.