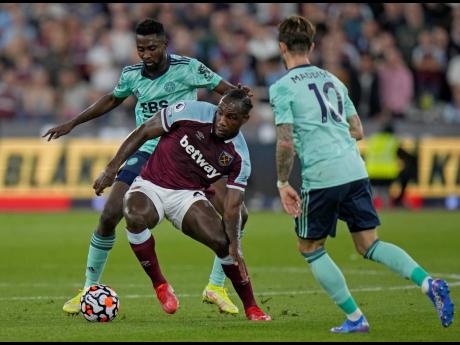 Reggae Boyz newcomers Michail Antonio and Ethan Pinnock were both on target in an action-packed English Premier League programme yesterday.

Antonio, 31, grabbed a late winner for West Ham United in their 2-1 victory at Leeds United, while Pinnock opened the scoring for Brentford in an absorbing 3-3 draw with leaders Liverpool.

Elsewhere, 29-year-old St Kitts & Nevis international Rowan Liburd scored in the 37th minute for sixth-tier Billericay Town, but they went down 3-2 at home to fellow strugglers Hemel Hempstead and remain bottom of the National League South.

Kortney Hause, who is of Bermudian descent, scored the winner as Aston Villa pulled off a 1-0 upset win over Manchester United at Old Trafford.

After serving a one-match suspension and missing last weekend’s defeat by Manchester United, Antonio returned to show West Ham what they had been missing.

Before Saturday’s game at Elland Road, Antonio was on a run of nine games against Leeds without a goal.

But his 90th-minute winner meant Leeds are still searching for a first Premier League win of the season.

Aaron Cresswell and Said Benrahma had come close, but it was Antonio who eventually delivered after some brilliant work from Declan Rice.

The England international picked up the ball inside his own half before slipping it inside to Antonio, who took a touch past his man before stroking it into the bottom corner in the first minute of injury time for his fifth league goal of the season and sixth in all, having also scored in a Europa League match earlier this month.

“Everyone loves a last-minute winner, fans were amazing and got us there today!” Antonio said on Twitter. “That goal was for you mum, happy birthday.”

Shortly afterwards Pinnock appeared to pull a muscle and was out of position when Liverpool equalised four minutes later through Diogo Jota, eventually hobbling off before half-time, but only after he managed to deflect an on-target Curtis Jones drive onto the post.

With the match level at 3-3, Toney thought he had grabbed the winner for Brentford, rifling the ball into the bottom corner with three minutes remaining, only for the off-side flag to cut short the home fans’ celebrations.

Bermuda captain Nahki Wells earned his first league start of the season for Bristol City, but he missed two chances, as the West Country outfit, in eighth place, fought back to earn a point in a 1-1 draw against Fulham at Ashton Gate.

In League 2, Mansfield Town had Tyrese Sinclair, son of Frank Sinclair, who made 28 appearances for Jamaica between 1998 and 2003, was sent off for violent conduct on 85 minutes, as they fought out a goalless draw against high-flying Leyton Orient at Brisbane Road.