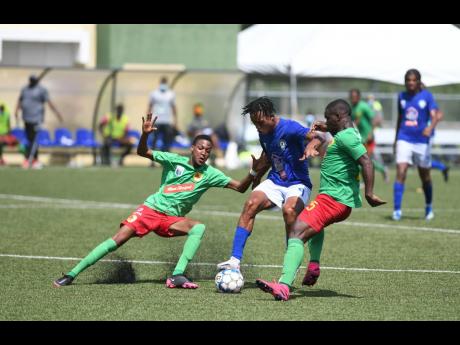 A WATER break, as stated, is intended for that: drinking water and cooling down. Observation of such stoppages in the Jamaica Premier League (JPL) serves up many such scenarios: players drinking water. However, a major part of the cooling exercise...

A WATER break, as stated, is intended for that: drinking water and cooling down. Observation of such stoppages in the Jamaica Premier League (JPL) serves up many such scenarios: players drinking water.

However, a major part of the cooling exercise also involves players pouring water on their footwear. The heat forms part of a balancing act for league operators, the Professional Jamaica Football League (PFJL), who are juggling to create a mid-ground that caters to the aesthetic appeal of producing high-quality standards for an international audience viewing matches via cable or free-to-air platforms.

For the players, and clubs, some find it a painful exercise and others take another view, saying it is all part of adjusting to the reality.

Along with the heat, he said there were injury issues.

“Sometimes the turf will injure you if you don’t have the proper footwear, with damage to your knees and shins. It’s slippery, most times you see the players go down it’s because their feett get stuck in the turf,” he pointed out.

Donovan Duckie, head coach of quarter-finalists Vere United, said “everything is based upon the climatic factor, so when it’s cool it’s good, it’s conducive for good play. When it’s hot, when it’s humid, it’s very dangerous to us.

“I’ve seen shoes bottoms being removed during games. I’ve seen a lot of shoes bottoms falling off because of the situation with the melting of the surface and, you know, it also is a hindrance in terms of when you fall on it in humid conditions,” he shared. “We have to drink too much water and that also slows down our ability to exert force.”

He said: “The main hazard is the pressure it places on the knees and ankles, and the heat that generates from the ground itself cannot be healthy at all.

On the contrary, technical directors of Mount Pleasant Football Academy and Cavalier Soccer Club have no issues with the conditions.

“We are so pleased that Pemier League football has come back to Jamaica and I’m sure the boys would be happy playing on any surface, so we’ve got no complaint at all,” said Mount Pleasant’s Walter ‘Wally’ Downes.

Cavalier’s Rudolph Speid said they are so grateful to just be playing, that they would play anywhere.

“You can’t fight the elements,” Speid said. “So if I were (in charge of) those teams, I wouldn’t be complaining too much, I’d make preparation. So you’d probably not play in plastic boots because you know it is going to be hot. And you’d probably make sure at the water break you have enough water to cool off your boots.

“So the heat is a problem yes, but all the teams have the same problem. So I wouldn’t make a big fuss about it, it is an all-weather field and we agreed that we were going to play on it.”

Speid, who is also chairman of the Jamaica Football Federation’s technical committee, added: “Couple months ago we wouldn’t have cared to play on some stones, to be honest, so now, who’s making an issue is kind of disingenuous. Everybody is playing on, it’s not like some people are playing on it and some aren’t.”

However, he expressed awareness of the injury concerns, noting: “I know it’s a bit difficult for some of the older players because it feels tough and it can injure you after a while ... but I wouldn’t make it a big issue.”

Meanwhile, Christopher Williams, the PFJL chairman, said the issue at hand is “unfortunate”.

“The issue of the turf is extremely unfortunate,” lamented Williams. “The board did discuss the turf in detail and we felt that it was more positives than negatives.

Continuing, Williams said: “So we assessed the turf and the main risk of the turf was the heat ... and as such, we went to great length to water the turf before, during and after each game so that we could keep the temperature down.

Dr Marc Ricketts, a general practitioner, who has travelled for international matches as team doctor for Jamaica’s men’s senior national football team, recognised the constraints in a pandemic and agrees the turf is not perfect.

“The surface does not allow for the heat to dissipate as much as a regular grass field, so there will always be concerns with hydration. It (turf) is not optimal,” he shared.

Explaining the effect of the turf on players, he said: “The constant pounding on the hard surface is going to take a toll based on wear and tear, which also generates joint injuries like knee and ankle problems.”

He said those injuries are normally related to tendinitis, which is “inflammation of the tendon where the muscles meet the bone. Those are mainly it.”

Playing on artificial turf and heat are issues that are not necessarily new to football, even Jamaica’s.

In 2019, England-based Reggae Boy, Bobby Reid, pulled out of Jamaica’s away Nation’s League match at Curaçao because the game was being played on an Astroturf. Reid, at the time, had a knee injury and thought it would have been aggravated.

“We’re operating in a pandemic and very few venues were approved by the Ministry of Health,” Williams stated. “The university venue was approved because of its seclusion, the changing rooms and the infrastructure that was there. So we did not have a lot of options.

Williams said they will reassess and see how they can improve next season.

“Going into next season given these issues with the turf and the injuries, it’s something that we will reassess and see whether we do more watering or we seek to execute in a different way.”