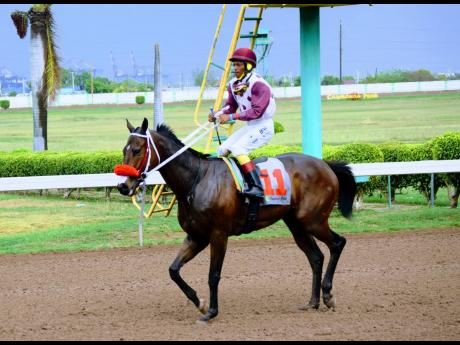 KING ARTHUR defied topweight 126lb for the second time within a month to beat CRIMSON by three-quarter length in yesterday’s Menudo at 10 furlongs.

Presented in impeccable condition by Jason DaCosta, KING ARTHUR stalked EROY heading into the clubhouse turn before slipping to the lead five furlongs out with Anthony Thomas.

DOUBLE CROWN immediately challenged KING ARTHUR but the 2020 Jamaica Derby winner found a third gear at the half-mile marker and accelerated into the lane with his six rivals pursuing in vain.

CRIMSOM improved into second along the rail a furlong and a half out, going past DOUBLE CROWN, but was no match for KING ARTHUR, who stayed on strongly inside the last furlong to clock 2:07.4, a month after winning the She’s A Maneater Trophy at a mile.

HOVER CRAFT closed along the rail for third, ensuring DaCosta almost $1 million in pursuit of two-time defending champion and leader, Anthony Nunes, who started the afternoon $2 million ahead in the trainers’ stakes race.