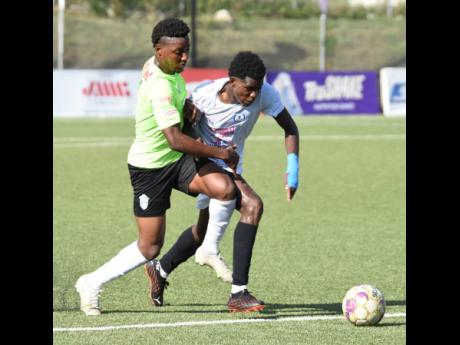 Ian Allen
Ian Allen/PHOTOGRAPHER Shaqueil Bradford (left) from Waterhouse and Ladale Ritchie from Mount Pleasant in a keen tussle for the ball during their first leg semi-final match in the Jamaica Premier League yesterday at the UWI-JFF-Captain Horace Burrell Centre of Excellence. Bradford scored in Waterhouse’s 1-0 win.

Waterhouse’s Shaqueil Bradford is coming into hot goalscoring form at the right time in his team’s quest for a third Jamaica Premier League title.

Bradford’s 80th-minute strike, his fifth in four games, propelled Waterhouse to a 1-0 win over Mount Pleasant in their semi-final first-leg game yesterday at the UWI-JFF-Captain Horace Burrell Centre of Excellence.

In a game where his teammate Andre Fletcher had the majority of the chances, including a close-range shot, which Mount Pleasant goalkeeper Shaven Paul had to parry, it was Bradford who managed to squeeze his shot under Paul’s arms, to put away his sixth overall goal of the season and provide a slim advantage for his team, going into the return leg on Wednesday.

It is a turnaround for the striker who, after scoring his first goal of the season against Dunbeholden on July 3, endured a five-game drought until he rediscovered his scoring touch on August 28 in a 4-1 win over Arnett Gardens. He has scored in every game since then.

Waterhouse assistant c Damion Gordon said that keeping Bradford in form, as well as ensuring that Fletcher stays sharp, is a focus of theirs, adding that improving their finishing, a problem they had identified when they started the campaign, has and will go a long way towards the achievement of their title target.

“Earlier in the season, we had been creating the same number of chances per game and we have some issues in terms of our scoring. We have fixed that. So hopefully, we are able to bring that over in the next leg,” Gordon said.

Waterhouse’s Denardo Thomas says that he is pleased that Bradford’s consistent work ethic and drive during the season is finally starting to bear fruit at the right time for the team.

“He is a good player and he works hard in training, so come match day we know that it was going to pay off,” Thomas said.

Mount Pleasant weren’t without chances themselves, with Kesslon Hall, in particular, coming close on several occasions.

Hall saw a shot in the closing moments of the first half hit the crossbar and in the second half, Jourdain Fletcher’s low cross found him in the penalty area, but he could not make contact to finish from close range.

Interim head coach Walter Downes said that given both teams’ attacking display in the first leg, he believes that there is still nothing to separate them quality-wise despite Waterhouse’s slender one-goal advantage

“I think the sides were evenly matched. We had a great chance to score on 65 minutes inside the six-yard box and that would have changed the course of the game if we had taken our chance. (There is) still nothing in it and all to play for on Wednesday,” Downes said.

“Two-legged affairs are normally finalised in the last 15-20 minutes of the second half of the second game. (It’s about) who can maintain the way they play, who can add that bit extra, who wants it more, who goes to the extra wire? So the amount of effort we put into this season to get to where we are, there is no way we will be found wanting on that,” he added.

Before the game, a minute’s silence was observed in tribute to the mother of Waterhouse head coach Marcel Gayle as well as former national senior women’s team manager Jean Nelson, who both passed away recently.

Thomas said that they had extra motivation to secure a win to honour their coach’s mother.