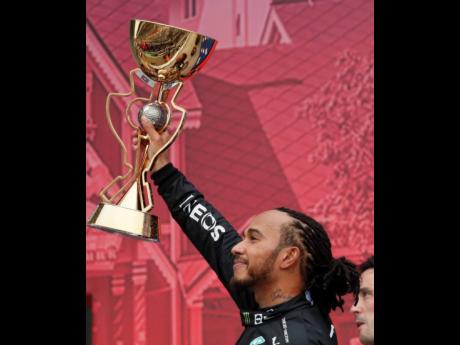 AP
Mercedes driver Lewis Hamilton of Britain celebrates with the trophy after winning the Russian Formula One Grand Prix at the Sochi Autodrom Circuit in Russia yesterday.

To win his 100th Formula One (F1) race, Lewis Hamilton drew on much of his vast experience from the first 99.

Hamilton used his overtaking skills, strategic thinking and driving skills in the rain to fight back from seventh place on the first lap to a landmark victory to retake the championship lead from Max Verstappen.

Hamilton was chasing Lando Norris for the lead when the rain started late in the race. Hamilton heeded his team’s advice to stop for intermediate tires — though he was reluctant to break off chasing Norris — but Norris stayed out on slick tires and paid the price when he slid off the track and let Hamilton through.

“It’s taken a long time to get to 100 and at times, I wasn’t sure it would come,” Hamilton said. It was Hamilton’s fifth win of the season and his first since the British Grand Prix in July.

“It’s a magical moment,” Hamilton added. “I could only have dreamed of still being here and having this opportunity to win these races and get to drive with such phenomenal talents this late in my career.”

Hamilton turned Verstappen’s five-point championship lead into a two-point lead of his own after the Dutch driver finished second after a dramatic drive from last on the grid. Carlos Sainz led the race early on and finished third for Ferrari.