Jimmie says | Half-hand in a ‘partner’ 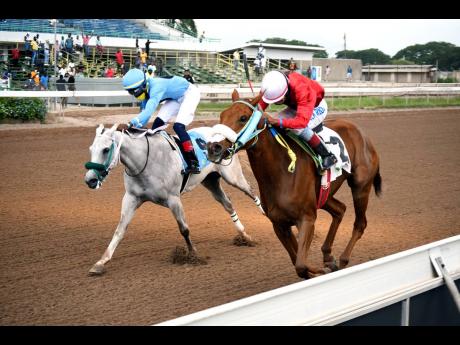 FOR local racing to once again have some level of intrigue, eager owners and dynamic race-by-race betting, the conditions system, which provides boring and costly ‘protectionism’, ranging from non-winners of two to four races, covering three to five-year-old horses, must be scrapped and flung as far away from Caymanas Park as possible.

Take two-year-old maiden runners out of the conversation for obvious reasons. Though in former years two-year-olds were known to have achieved respectable rating numbers by the final quarter of the year, making them eligible to run among older horses, the quality no longer exists. Two-year-olds have been debuting later with each season and need time to develop among peers.

As for three-year-olds, especially in a jurisdiction where none will be shunted off to stallion or broodmare duties at the end of the year, those having displayed ability should be given every chance to mature into a much-later classic season, starting with Guineas races in June, an August St Leger (Emancipation or Independence Day) and October derby (Heroes Day) with major prep races in May, July, and September, respectively.

However, there remains a huge grey area, more of a black hole, for three-year-olds, the majority of whom fall into this entrapment of ‘conditions’, which does nothing but fleece owners’ pockets of training fees and incidentals to provide fodder for their superior classic-quality peers, who would have already creamed off the big purses as two-year-olds.

It is safe to say that somewhere along the line, starting with pedigree, conformation, ability shown as a two-year-old, performances on the exercise track and during races, any trainer worth his salt ought to be able to honestly tell an owner whether a horse in his care should be lining-up in a three-year-old maiden event with a Guineas-placed runner.

In this matrix, it is the long-suffering owner whose pocket isn’t being taken into consideration. Before the claiming and conditions system was adopted from North America in 1993, owners of three-year-olds had the option of debuting in maiden company or going straight to ‘D’ Class with topweight 126lb, competing for the same purse money as a three-year-old maiden race.

The option of going straight to ‘D’ Class provided for quicker settlement of horses in whichever rating group with which their ability was in alignment, either climbing the ranks or descending, a more equitable distribution of purse money in either direction, which also resulted in more competitive fields and wagering.

What obtains in condition races is the theory that all maidens are equal, all non-winners of two, three, and four races are also equals - because they won the required number of races to be eligible for the event - regardless of quality of opposition faced.

This theory can work in jurisdictions with multiple racetracks offering varying purse levels, thousands of horses moving state-to-state, not Caymanas Park with possibly 900 runners outside of two-year-olds. Hence, owners of three, four-, and five-year-olds are constantly caught in a trap of maiden, non-winners of two, three, and four races, complaining that purses are too low because they believe when they eventually win a race, or two, they should be recovering the costs of keep and care lost in the black hole of conditions, a system akin to throwing half-hand in a ‘partner’.

Why does a one-track jurisdiction need protectionism – four and five-year-old maiden races, not to mention non-winners of two and three events for the same categories of horses – when 90 per cent of the cohort would have raced multiple times as three-year-old maidens, long exposing their ability for placement among open company?

How many owners have stopped to look around and realise that rating and handicapping would allow their horses to either descend or rise from a midway entry level, ‘D’ Class, running for the same purse as three-year-old maidens. Do they understand that they would have been earning, not spending time and money making up fields for classic-potential and classic-placed horses well into their respective four-year-old seasons?

The Jamaica Racehorse Owners Association needs to stand up and be counted instead of cowering behind the respective trainers’ associations and holler for purse increases. It is the system, condition races, that forces them to ‘subsidise’ racing as they love to exhort.