Undroppable for England, Sterling down pecking order at City 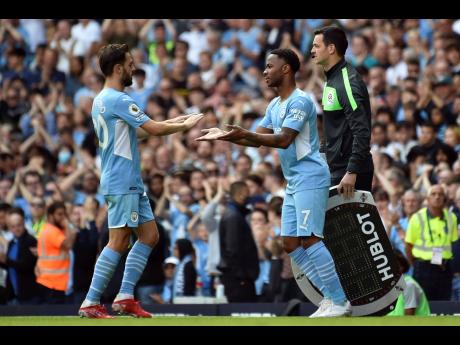 Indispensable for his country. Increasingly overlooked by his club.

Raheem Sterling is, at 27, in the prime of his career, but also in a curious place at the moment.

Entering as an 87th-minute substitute — as he did in Manchester City's win at Chelsea in the Premier League on Saturday — is something he might have to get used to, especially for the team's biggest games this season.

The statistics paint a worrying picture for Sterling.

He has started two of City's six games in the league and those are the ones the team has dropped points in — a 1-0 loss at Tottenham and a 0-0 draw at home to Southampton. They are also the games City have looked their most sterile in attack.

Without him in the starting line-up, City have won 5-0 twice — against Norwich and Arsenal — and beaten both Leicester and Chelsea 1-0 away with assured, dominant performances.

There are clearly more factors behind this disparity than just Sterling's presence. Tottenham, for instance, was the first game of the season and the Southampton game came less than 72 hours after a gruelling Champions League match against Leipzig.

Yet, it does tell part of the story.

The win at Stamford Bridge was City's best display this season, if not much longer, and sent a statement to the rest of the league.

It also was another indication that Sterling is not part of the first-choice line-up. His favoured position on the left wing is now occupied by Jack Grealish, the club's record signing at $139 million in the off season, with Phil Foden another competitor for that place.

Over on the right, Gabriel Jesus is flavour of the month, mainly because of a work rate that really impresses Pep Guardiola. Riyad Mahrez offers a compelling alternative.

It might be that Sterling is used most regularly now as a central striker, if City opts to have one, but his return of three goals in his last 25 appearances for the team — not including that cameo against Chelsea — suggests he is not scoring goals at the rate Guardiola would be happy with.

There is also competition centrally, in Ferran Torres or through more of a false nine in Kevin De Bruyne, Foden or even Ilkay Gundogan.

It could not be more different with England, for whom Sterling is a certain starter alongside captain Harry Kane in an attacking three. He has also scored five goals in his last 12 games for his country, three of them being crucial strikes at the European Championship, where he was arguably the team's best player.

City's style of play is very different to England's, though. It is a more technical and precise approach, with the likes of Grealish and Portugal playmaker Bernardo Silva — undroppable at the moment, given his performances — ensuring Guardiola's midfield is harder to dispossess than perhaps ever before.

Sterling's best attributes — pace and exploiting space behind defences — are not what City need against most of their opponents right now.

"He was so active in terms of movement," Guardiola said of Sterling last week after the Southampton game. "But football depends a lot on how good we do the process in the build-up and when it happens, our strikers and wingers play better."

Given his profile and pedigree, Sterling has to be thinking about his future. His contract at City runs through to the summer of 2023 and he would not be short of offers.

With City hoping to go deep in every competition they enter, Sterling will get plenty of game time this season, but maybe not in the games he really wants to play in.

Today's match at Paris Saint-Germain in the Champions League will give another indication as to Sterling's current standing at City. With Grealish expected to stay on the left wing, Sterling might have to settle again for a place on the bench.

PSG vs Manchester City at 2 p.m.

Leipzig vs Club Brugge at 2 p.m.

Porto vs Liverpool at 2 p.m.

Real Madrid vs Sheriff at 2 p.m.