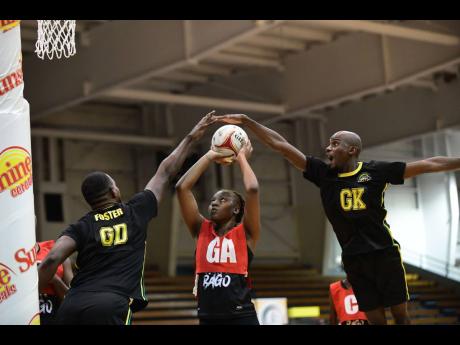 National men’s netball team head coach Keyon Shawn Murdock says that they hope the platform given by their performance against Trinidad and Tobago’s senior women’s team will be the catalyst to further elevate the profile of the game.

They defeated the Calypso Girls 66-22 in the opening game of the tri-nations series at the National Indoor Sports Centre last night. Jamaica were led by goal shooter Raheem Wallace, who scored 49 goals of his 55 attempts and was supported by captain Kurt Dale, who scored 16 goals from his 19 attempts.

Trinidad and Tobago captain and goal attack Khalifa McCollin only managed seven goals from eight attempts while goal shooter Afeisha Noel had 12 goals from 16 attempts. With ambitions of international competition in the future, Murdock says that he was pleased that his team got the chance to display their talents to a wider audience.

“It’s good that we are a part of this series,” he said. “We have been playing behind the scenes with the [Sunshine] Girls for a very long time. It is good that we are presented with an opportunity to showcase our talents to the wider world. The guys worked hard and they are passionate about the game.”

Murdock credited the accurate shooting from his team but says that they will have to address their turnovers when they play the Jamaica women next week.

While there were concerns about the benefit of having a men’s team included in the series, Murdock said that their inclusion will also help the girls prepare for the higher- ranked teams they will eventually face later on.

“The girls really need this type of competition to play against the likes of Australia and New Zealand,and so on. Happy that we are a part of the series. It’s a great opportunity for us, and it is a step in the right direction for men’s netball.”

McCollin said that the test against the Jamaican men was an ideal assessment of their progress so far given that it was their first competitive game since the COVID-19 pandemic. Additionally, she says that the aggressive play provided a good platform to build on as they prepare for a similar physical encounter against the Jamaican women tomorrow.

“We are going to take a lot of key lessons from here, just being smarter on the ball, keeping it short and sharp and sticking to our processes,” she said. “The girls enjoyed the match. It was very physical, and it’s just probably the same coming up on Saturday against the Sunshine Girls.”