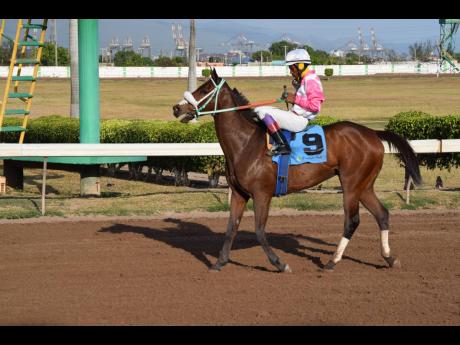 HOVER CRAFT yesterday rolled back his 11 years to outstay six rivals, none half his age, to score a four-and-a-half length win for leading trainer Jason DaCosta in the Mark My Word Trophy at nine furlongs and 25 yards.

Carrying 110lb with all-but-crowned champion jockey, Anthony Thomas, HOVER CRAFT raced near the rear of the small field as EROY led DOUBLE CROWN and MONEY MONSTER in fast splits through the clubhouse turn and down the backstretch.

Making his bid as a team with ONEOFAKIND inside the last three furlongs, HOVER CRAFT swooped down second off the home turn and charged at EROY, who was always bound to quit with 124lb.

EROY threw in the towel approaching the last half-furlong, giving way to HOVER CRAFT, who went by and pulled off for a comfortable victory in 1:55.3, extending DaCosta’s narrow lead in the stakes standings.

Anthony Nunes, the two-time defending champion, landed the following event with BERN NOTICE in his bid to keep pace with DaCosta, who started the season in March after taking over his late father’s high-powered barn.

Dick Cardenas booted home two winners on the 10-race card, CATABA in the opening event and ALEXA’S LODGE, who scored a mild 8-1 upset in the eighth.