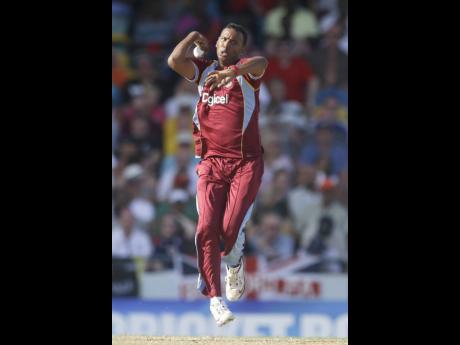 Former West Indies leg-spinner Samuel Badree says the presence of more than one spinner in many of the teams for the ICC Men’s Twenty20 World Cup was not surprising.

But Badree was concerned that defending champions West Indies did not have a highly rated spinner in their squad, and felt this could hurt their chances of winning a third T20 World title.

Writing in a promotional column for the International Cricket Council (ICC), the sport’s world governing body, on the eve of the T20 World Cup, Badree surmised spin bowling plays a major role in this format of the game.

He said he expected to see this play out during the global showpiece, starting today in the United Arab Emirates and Oman.

“Most of the teams have quality spinners in their ranks – at least two of them – because of the conditions teams predict that they will face,” he said. “They (the spinners) can all win games single-handedly.

“If there’s one area of the West Indies team that I’m worried about, it’s the spin (bowling) department. It’s an area of shortcoming for them.”

Badree added: “They have the one frontline spinner, Hayden Walsh Jr, who had an exceptional home series quite recently. He didn’t have a good Caribbean Premier League and, going into this tournament, his form is not the best and his confidence might not be the best.

“He is quality enough to do well in the tournament, but, outside of him, there aren’t any out-and-out spinners. Being able to take wickets throughout the innings is so important.”

Walsh is complemented in the Windies 15-member squad by Jamaican left-arm spin bowling all-rounder Fabian Allen and Barbadian Roston Chase, whose part-time off-spin is expected to come into play in tight situations.

Veteran batsman Chris Gayle could also bring his arm over in a crunch and captain Kieron Pollard experimented with off-spin a couple of matches during home series earlier this year.

Badree said the absence of a quality spin attack will require West Indies to score big totals to overcome their deficiency in the area of the bowling.

“If the power hitters, such as Evin Lewis, Chris Gayle, and Andre Russell, can get the team to over 200 runs consistently, that area of deficit can be ignored,” he said.

“But, if we don’t score those type of runs, the bowling will be found out and the spin bowling in particular.”

Badree said the importance of spin was proven in previous editions of the T20 World Cup, especially when he was a member of the Windies side that won two editions of the tournament.

“Spin was a big strength of ours when we won the tournament in 2012 and 2016,” he said. “We had Sunil Narine, Sulieman Benn and myself, who could all use the new ball in any game.

“Spin is always important and has an integral role in T20 cricket. We’ve seen that in previous editions of the T20 World Cup.”

Badree picked South African Tabraiz Shamsi as the spinner that could have the biggest impact on the T20 World Cup.

Badree said champion Indian off-spinner Ravichandran Ashwin, and the Australia pair of Adam Zampa and Ashton Agar, could also prove to be a handful during the T20 World Cup.