Jimmie says | Winchester Road on a frolic of its own 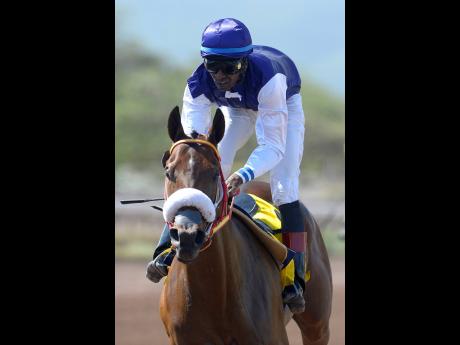 File
She’s A Maneater, with Omar Walker aboard.

IT has been in excess of two months, egging on to three, that the Jamaica Racing Commission (JRC), coincidentally or not, with a full TV crew in tow, interrupted a race meet at Caymanas Park to conduct a snap raid. It was broadcast on national TV afterwards that used syringes were observed in the paddock where horses are held before moving to the saddling barn, plus revelation that electrical devices (batteries and/or buzzers) were found in stables.

It was rather odd that a TV crew was on hand to capture, blow by blow, what should have been a non-telegraphed raid, perceivably aimed at catching cheats red-handed. How could the JRC have determined that nobody among the TV crew had any connection, whatsoever, to any participant with horses running on the day?

Empty syringes, of course, tell no tale and, truth be told, are illegal but commonplace at Caymanas Park, where many trainers consider themselves veterinarians — some out of plain stubbornness, others on account of affordability because they insist on owning horses for whom they can’t pay vet bills. They will also insist that the absence of on-call racetrack veterinarians forces them to keep on hand therapeutic medication, which must be administered intravenously for emergency use.

If it is that syringes were found in the paddock area on a race-day, it would suggest that horses were illegally administered performance-enhancing substances which, if effective, should have been picked up by laboratory tests, as long as the respective urine samples were properly collected by the JRC-controlled testing barn on the day in question.

How many positive drugs tests emerged from the day of the raid? If there were none, that would suggest something is either awry in the JRC’s testing barn, the laboratory process, or it could be that all the users of those syringes were hoodwinked by the many snake-oil salesmen touting ‘movers’ at Caymanas Park.

Has the JRC bothered to check whether there was an usually high number of positives or underperformances on the day of the raid? If not, what was the purpose of the raid? If there were adverse findings, what changes, if any, have since been implemented in the paddock and testing barn?

How about the electrical devices that were purportedly discovered in stables? What of those hearings? Who has been summoned, if anyone? In which stable, or stables, were these devices found?

It appears that the JRC has suddenly become active with no follow-through, as if someone is trying to justify their presence, especially with news leaking out of Winchester Road that stewards are being undermined and that the director of racing title, which normally presided with the chief steward, is out to be unceremoniously reassigned.

The latest happening is that of topweight, once again, being reverted to 126lb for the highest category of horses. Does the JRC believe there was no need to have had topweight in excess of 126lb? Did someone just get up one morning and say, ‘Hey, let’s move topweight to 130lb’, with no rationale behind it?

What was wrong with how topweight was being allotted was the ridiculous and asinine handicapping of horses by distance, which stipulated topweight of 130lb for the top-rated horse at distances of up to six-and-a-half or seven furlongs, whatever the hell it was. This week the top-rated horse had 130lb, three weeks later he had 126lb going a mile against the same set of horses. Rubbish!

If topweight for Group 1 is to be 130lb, it must be based on horses’ ratings, nothing to do with distance being contested. It must be about having a properly maintained and published rating system which, based on horses’ performances, corresponds with parallel weight allotments, equalising the chances of each horse in a given race.

Therefore, if a horse rated 121 is top-rated among all the horses nominated for a Group 1 event, because the topweight must be 130lb, the scale moves nine pounds up, carrying the rest of the field up in weight as well – equalising everybody’s chances as per their original rating.

However, when the event is being reassessed by the handicapping panel, should the topweight horse win, it is the animal’s original rating, 121, (and those of the other runners) that is adjusted, not the actual weight carried, in order to reflect the quality of victory and opponents faced, ensuring when they all return in another Group 1 event, possibly against higher-rated horses, the ratings remain true to performances only.

What if an imported horse, or another She’s A Maneater, for example, emerges within the coming months, and decimates the best horses in five or six consecutive races with 126lb? What‘s the next move? Go back to 130lb? KMT.

However, the willy-nilly reverting to 126lb comes as no surprise. This was sanctioned by the same JRC that had altered the entire back end of the racing calendar to suit one horse’s participation in the Caribbean Classic. Go figure.