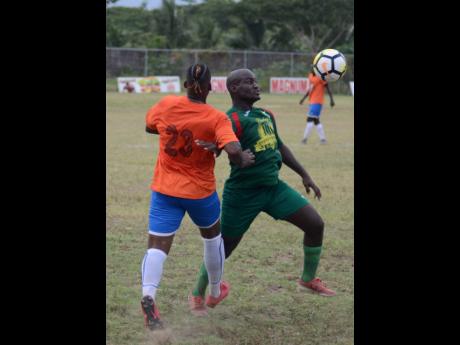 File
In this file photo from June 2018, Wadada’s Deshawn Woolery (right) brings the ball down while being pressed by Dunbeholden’s Kevaughn White during a playoff match at Dunbeholden for a spot in the Premier League.

Wadada head coach Daniel Ricketts is not optimistic going into today’s meeting with the Jamaica Football Federation (JFF) regarding their abandoned Premier League play-off game against Montego Bay United (MBU), but he’s hopeful it will produce a...

Wadada head coach Daniel Ricketts is not optimistic going into today’s meeting with the Jamaica Football Federation (JFF) regarding their abandoned Premier League play-off game against Montego Bay United (MBU), but he’s hopeful it will produce a favourable outcome.

After the withdrawal of UWI FC from the Jamaica Premier League (JPL), one place was left available in the competition, and parish rivals, Wadada and MBU, were to contest the play-off match.

The teams were scheduled to play the match on October 6. However, Wadada had administrative issues, mainly regarding registration of players and officials and the availability of a bank account.

They were unable to meet the October 1, 5 p.m. deadline to complete documentation, after the date had been pushed back a week to accommodate the JPL final.

But the JFF’s Competitions Committee ruled that Wadada were eliminated due to their late registration and MBU had been granted the spot for next season.

Wadada have since declared their intention to take legal action against the ruling, and JFF President Michael Ricketts has reached out to the club to discuss the matter.

Daniel Ricketts says that if the discussion does not go in the direction he planned, he is prepared to walk out of the meeting and go to court instead.

“We are going there hoping to discuss what we are planning to discuss. I am not too optimistic because at the end of the day, I know they want Montego Bay United in,” he said. “They haven’t said it out loud but I know that is what they want.

“But if it is not what I want, I will be walking out of the meeting.

“We just want a mutual understanding between us and them. I want the players to get a chance to show what they have, win, lose or draw. Give them a chance, that is all I need.

“People must know what really transpired and not what they are putting out there.

Recent comments from the JFF president suggests he is not fully informed on the situation. He said but if that is the case, he will be in the meeting.

However, JFF attempted to clarify the situation with a press release last week.

It says that after the season was approved to be played in June, UWI FC withdrew just days before the competition.

However, it also offered that had the qualifying game been played prior to the just-concluded season it would have delayed the start of the competition by four to six weeks.

“These clubs would need the opportunity to register and put a team together for the play-off,” the JFF said. “A decision was made to commence the season with 11 clubs and the play-off would be played nearer the end of the season with the winner joining the other 11 (clubs) in the 2021-22 season.”