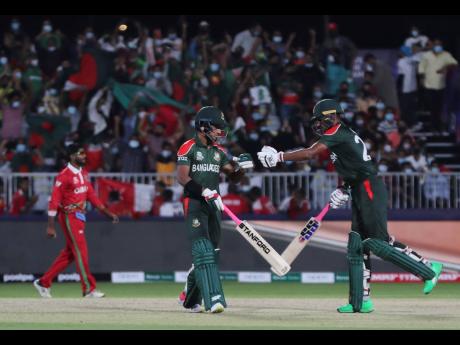 Opening batsman Mohammad Naim, who replaced Soumya Sarkar, reached 64 and Shakib Al Hasan scored 42 off 29 balls before Bangladesh were bowled out for 153 off the last ball.

Mustafizur Rahman bowled five wide balls in his first over and also dropped one of the two early catches before bagging 4-36 as Bangladesh got their act together in the latter half of the innings and restricted Oman to 127-9.

Oman had a sniff until opener Jatinder Singh (40) was at the crease, but once Shakib (3-28) had him caught in the deep and off-spinner Mahedi Hasan bowled an economical spell of 1-14, the co-host capitulated.

Earlier, after losing the toss, Oman also had a below-par performance in the field with Naim twice getting dropped. Shakib and Naim both shared 80-run third-wicket stand but Bangladesh lost eight wickets for 52 runs once careless Shakib got run out in the 14th over.

Fast bowlers Bilal Khan grabbed 3-18 and Fayyaz Butt, who took a spectacular diving catch off his own bowling to dismiss Mahedi for 0 early on, took 3-30.

A 92-run partnership between Richie Barrington (70) and wicketkeeper-batsman Matthew Cross (45) formed the cornerstone of Scotland’s total of 165-9 despite PNG claiming six wickets for just 15 runs in the last two overs.

PNG came back strongly after losing half of their side within the first six overs for just 35 runs, but were bowled out for 148 with three balls remaining.

“We got just over par (total) on that wicket,” Barrington said. “At first, we didn’t have a target in mind, and just wanted to get used to the wicket. Thankfully, we managed to get that big partnership which was quite key in the end.”

Norman Vanua gave PNG an outside chance with a top score of 47 while Kiplin Doriga (18) and Chad Soper (16) added late runs.

Fast bowler Josh Davey picked up 4-18 that included the key wicket of Vanua, who was caught behind in the 18th over.

PNG did well late in the innings when Charles Amini made two good catches in the deep to dismiss Cross and Barrington. Fast bowler Kabua Morea (4-31) claimed three of his wickets in the last over during which Michael Leask (9) was run out.

“If we can get more exposure we might be able to express ourselves better,” PNG captain Assad Vala said. “Scotland are a really good bowling team and they put us under pressure and we crumbled. The lower order brought us back into it.”