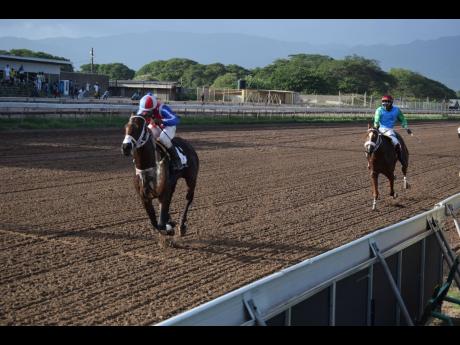 Anthony Minott
Anthony Minott/Freelance Photographer CALCULUS (left), ridden by Paul Francis, is well clear of FURTHER AND BEYOND and the rest of the field and sprints away to win the 2021 running of the Gold Cup over seven furlongs at Caymanas Park yesterday.

ANOTHER CHAPTER was added to CALCULUS’ storybook season yesterday, a 14-1 upset in the Gold Cup, capitalising on the misfortune of even-money favourite, FURTHER AND BEYOND, whose jockey, Christopher Mamdeen, was forced to ride Apache-style after losing his stirrup five and a half furlongs out.

Already thrown on its head after morning-line favourite, MAHOGANY, was declared a late non-starter prior to the day’s first race, the seven-furlong Gold Cup came upon a second fork in the road when Mamdeen suddenly sat back in his saddle after a furlong and a half as FURTHER AND BEYOND disputed the lead with KING ARTHUR.

With legs dangling, the 2019 champion jockey turned back topweight KING ARTHUR, but FURTHER AND BEYOND’s nemesis and former stablemate, CALCULUS, who beat him in the Jamaica St Leger a month after changing barns, swooped down for the kill with Paul Francis on the home turn.

It was only a matter of when CALCULUS would have assumed the lead, which he picked up a furlong and a quarter out, sweeping by FURTHER AND BEYOND to win by two and a quarter lengths, clocking 1:25.0.

CALCULUS’ Gold Cup victory marked the third major silverware this season for the bay colt since moving to Gary Subratie’s barn, having followed up his St Leger win by prevailing over BILLY WHIZZ and FURTHER AND BEYOND in a thrilling Jamaica Derby finish.

SWEET N SMART handed Halledeen his second winner on the nine-race card after landing the fourth event with MIRABILIS.