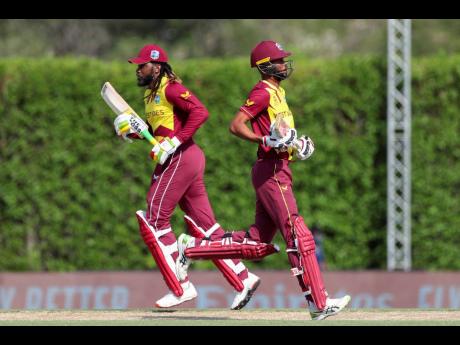 The West Indies look to put the disappointment of their opening loss behind them today when they face South Africa who are also looking for their first win of the ICC Men’s T20 World Cup.

If both team’s first match batting display is anything to go by, then we may not be in for a runs feast. However, both sides will be keen on putting up better numbers than the 55 the West Indies scored against England, and the 118 for nine South Africa managed against Australia.

West Indies head coach Phil Simmons knows all too well that another loss would severely hamper the team’s chances of making it out of the group, and the Trinidadian made it clear that every game from now on is do-or-die.

“Every game now is extremely important and we need to look at each game as a final and try to play accordingly,” Simmons said. “The message we want to put out against South Africa is that we have learnt from the last defeat and we are assessing the situation of games a lot better in batting, bowling and fielding.”

After the batting flop on Saturday, the West Indies may want to strengthen their line-up by adding Roston Chase, who scored a half-century in the second warm-up game.

Chase’s inclusion would mean that either Lendl Simmons makes way and Chris Gayle is sent to open the innings, or Gayle is asked to sit out the encounter.

Either way, the West Indies camp is still banking on their aggressive style of play to lead them to victory.

“The style in which we play cricket has always been the style with which we play, but we also have to assess the situation each time and play accordingly,” Simmons said. “We will continue to be our aggressive style, but our shot selection and assessment must be a lot better.”

On the bowling side, assistant coach Roddy Estwick said in a pre-match press conference that the unit should remain the same, having done themselves justice against England by picking up four wickets, and it is a matter of continuing the hard work the team has put in, entering the tournament.

“We have to make sure that whoever walks on that park is ready and prepared well enough to go and execute their skills and have the confidence in their ability to do what is needed,” Estwick said.

The game bowls off at the Dubai Sports City Cricket Stadium at 5 a.m. Jamaica time.