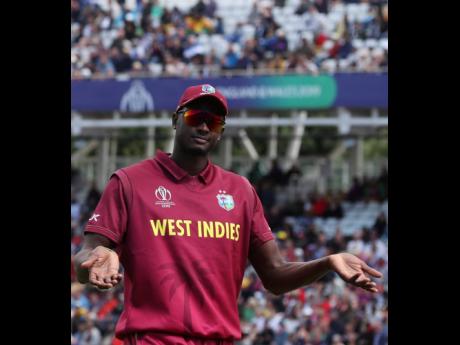 Former West Indies fast bowler Kenny Benjamin says naming Jason Holder as a replacement for the injured Obed McCoy at the ICC Men’s T20 World Cup has come a little too late. The left-arm seamer McCoy was ruled out of the ICC tournament due to a...

The left-arm seamer McCoy was ruled out of the ICC tournament due to a right shin injury. He played the opening match against England on Saturday but missed the second match against South Africa on Tuesday.

Holder, who was named as part of the reserve squad who travelled to the United Arab Emirates with the team, has been named as a replacement, and the change to the West Indies squad was approved by the ICC tournament’s technical committee. The Barbadian will immediately be available for selection for the third Super 12 match against Bangladesh at the Sharjah Stadium tomorrow.

Benjamin, who played 26 Tests and 26 One-Day Internationals for the West Indies, says that Holder should have been part of the initial squad, and the former Leeward Islands player says the latest development will not help the West Indies’ cause much based on their current position.

“Holder coming in now is nothing to shout about because I think he is in way too late,” Benjamin said. “I don’t think he is going to be able to save the West Indies’ cause. I think questions need to be asked about the selections and ‘non-selection’ of players when this tournament is over.”

The West Indies are facing the daunting task of advancing to the next phase of the World Cup, having registered back-to-back losses against England and South Africa. The regional side, who are at the bottom of Group One’s standings without a point, put in a dismal showing with the bat in the opening encounter by being bowled out for 55 runs in a six-wicket loss against England and then followed that up with 143 runs in an eight-wicket loss to the Proteas.

Benjamin says things could have been different if players such as Holder, who is the current number one Test all-rounder, had been in the team from the start.

“He can go there and perform well and the West Indies win their three remaining matches, but my thing is that if he was there from the start, it would have given our team a lot more depth both in batting, bowling, as well as in the field,” he said.

The West Indies will play their third match against Bangladesh in Sharjah starting tomorrow at 5 a.m.