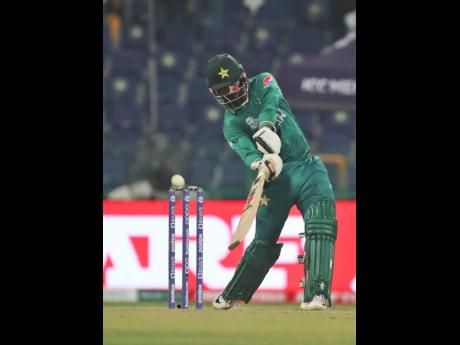 The win keeps Pakistan atop Group Two with eight points after another clinical display by captain Babar Azam and his men.

The Pakistanis, who elected to take the first strike after winning the toss, posted a formidable 189 for two, set up by an opening century stand between captain Azam and wicketkeeper-batsman Mohammad Rizwan.

The pair put on 113 for the first wicket, with Rizwan carrying his bat for an unbeaten 79 from 50 balls, with eight fours and four sixes. Azam was equally impressive, as he struck 70 from 49 balls, with seven fours.

Mohammad Hafeez chipped in with a quick-fire 32 from 16 balls, with five fours, towards the back end of the innings.

Once again, another disciplined bowling effort from Pakistani meant that Namibia really never threatened the score and in the end, they could only manage to get to 144 for five in their allotted 20 overs.

All-rounder David Weise top-scored with an unbeaten 43 from 31 balls, while Craig Williams chipped in with 40 from 37 balls.

An elated captain, Azam, spoke about the team’s plans coming to fruition and things ramping up nicely before the business end of the tournament.

“Everything has gone according to plan and we’re looking forward to the semi-finals and playing our cricket with the same intensity,” he said.

Meanwhile, in Group One action, South Africa boosted their chances of moving on to the final four, as they dominated Bangladesh in a six-wicket win.

South Africa now lie second in the group on six points, two behind leaders England and two ahead of third-place Australia.

The South African pace attack helped to set up the win, as they ripped through the Bangladesh line-up to bowl them out for 84 in 18.2 overs.

Kagiso Rabada and Enrich Nortje shared six wickets between them and spinner Tabriaz Shamzi chipped in with another two wickets.

Captain Temba Bavuma led a slightly wobbly run chase with an unbeaten 31 from 28 balls, to get the South Africans over the line at 86 for four in 13.3 overs.