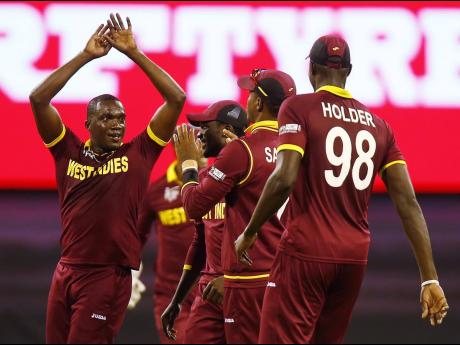 File
File photo shows fast bowler Jerome Taylor (left) as he is congratulated by West Indies teammates after taking the wicket of Indian batsman Rohit Sharma, during their Cricket World Cup 50-over Pool B match in Perth, Australia, in 2015.

FORMER JAMAICA and West Indies fast bowler, Jerome Taylor, says the regional side should go back to basic cricket if they are to reap any further success at the ongoing ICC World Cup T20 tournament.

The West Indies are staring down the scenario of relinquishing the World T20 title, facing elimination while lying fifth in the six-team Group One standings with two points from three games.

The Phil Simmons-coached side will need to win their upcoming games against Sri Lanka and Australia and hope that other results go their way to have a chance of moving on to the final four.

With humiliating losses against England and South Africa and a slim victory against Bangladesh, Taylor is urging the players to play simple cricket and refocus in a bid to save their World Cup hopes.

“Everyone has branded us as a power-hitting team and has planned for us, but sometimes simple, basic cricket is needed to get success, even in the short format of the game. We must appreciate the singles in T20 cricket and not always rely on our power-hitting because when it doesn’t come off, the team comes under pressure.”

Taylor, who was a member of the West Indies squad that won the 2016 T20 World Cup, says the next couple of days should be used to retool the side mentally.

“Sometimes when you are losing it’s best to take your mind off the cricket a bit and just have discussions. Mentally, the players are drained and that little break can do a world of good. We know what the team can do when they are mentally ready, that was what helped us to win back in 2016,” added Taylor.

Taylor added that back in the last campaign, the team was mentally up for the challenge and preparation leading up to the tournament was vital towards the team’s success.

Unlike 2016 when all the batters made significant contributions, the West Indies batting unit in this tournament is yet to fire, registering scores of 55, 143 and 142 in the three games so far.

“The batters need to realise that if it’s not your day, they should find a way to rotate the strike and play what the surface is giving.”