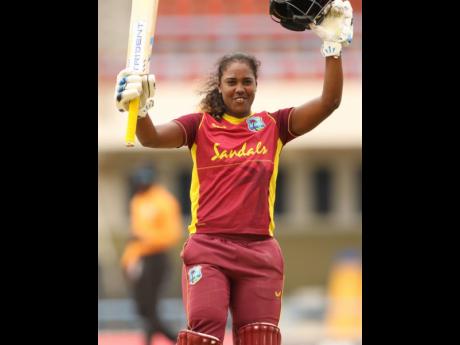 Hayley Matthews starred as West Indies Women wrapped up their second One-Day International (ODI) series victory over Pakistan Women in five months when they beat the hosts by 37 runs in a low-scoring affair here yesterday.

The Caribbean side managed only 153 after being asked to bat in the second ODI at the National Stadium but then bundled Pakistan Women out for 116 in the 40th over to follow up on Monday’s 45-run victory in the opener.

Last July, West Indies edged the Pakistanis 3-2 in a five-match series in the Caribbean.

“We wanted to not only win the series, but have a clean sweep and win it 3-0,” Player-of-the-Match Matthews said afterwards.

“The girls are really into winning that third game [on Sunday].”

Pakistan Women appeared poised for victory when they cruised to 67 for two in the 25th over with top-scorer Omaima Sohail (27) and captain Javeria Khan (24) involved in a 28-run, third-wicket stand.

However, Matthews’ intervention triggered the slide, the right-arm off-spinner snatching four for 26 as the last eight wickets tumbled for 49 runs.

She was supported by new ball pacer Shamilia Connell, who was brilliant in a 9.2 over spell, taking three for 18.

Matthews had earlier struck 26 and Deandra Dottin, coming off her career-best century in the first ODI, top-scored with 34, while Shemaine Campbelle and Stafanie Taylor both chipped in with 23.

Dottin gave the side a decent start, posting 31 for the first wicket with Rashada Williams (14) and a further 33 for the third wicket with Taylor after Williams and Kyshona Knight (0) both perished in the 12th over without a run added.

When Dottin was tragically run out in the 20th over, Taylor, who counted two fours in a 46-ball knock, then kept the innings going in a 33-run, fourth-wicket stand with Matthews, whose 47-ball stay also included a brace of fours.

Both Taylor and Matthews fell in the space of five overs to leave West Indies Women on 114 for five in the 34th over, and it was left to Campbelle to shepherd the lower order with her unbeaten knock off 43 deliveries.

In reply, openers Muneeba Ali (17) and Sidra Ameen (11) batted slowly, and by the time both perished, Pakistan Women were only 39 for two in the 18th over.

Omaima and Javeria attempted to repair the damage, but once Javeria was run out in the 25th, Matthews and Connell combined to destroy the middle and lower order.