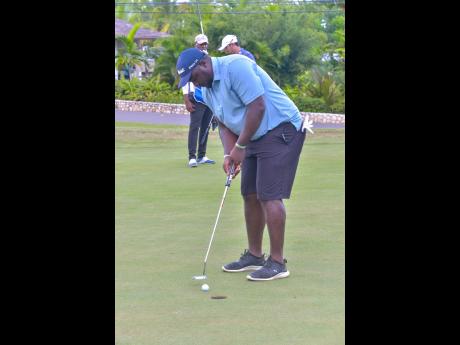 Local pro Wesley Brown is keeping himself in the mix after the opening round at the 54-hole Jamaican Open Golf Championship at Tryall in Hanover, with an even-par round of 72, which is good for a tie for 11th place.

Brown showed good form on the front nine, rattling in four birdies but stumbled with three bogeys to make the turn at one-under-par.

A birdie on the par-five 11th hole meant that the St Ann native was two-under with seven holes to play, but a double bogey and a bogey on the par-four 14th and 15th hole, brought things back for the Jamaican, who finished his round with a birdie on the 17th hole to head into the clubhouse with an even score.

For Brown being the best-placed Jamaican after day one is a good sign heading into the remainder of the tournament.

“It feels good; even par is not a bad start,” he said. “The golf course is playing well and I should have taken more advantage of the soft calm conditions, but overall, I will take what I get.”

Compatriot Sean Green is two shots behind Brown, from his two-over-par round of 74, to be tied in 18th place. Green shot two birdies and four bogeys in his round.

Canadian Dustin Risdon lit up the Tryall course to take the overall lead after day one, with a four-under-par opening round 68.

Risdon closed out the front nine with back-to-back birdies before birdieing the 11th and the 16th hole to add to his bogey-free round.

“It went pretty good after making a few shaky swings, but it didn’t get me into any trouble,” Risdon said. “I was able to save pars on the holes that I was out of position on, and I am really happy with how the round went, and I am looking forward to the next two days.”

Americans Stephen Grant, Landon Michelson, Carter Morgan, and Trinidadian Benjamin Martin are all in the four-way tie for second place, with three under par rounds of 69.

In the amateur section, defending champion William Knibbs holds the clubhouse lead over close rival Justin Burrowes, with an opening-round two under par 70. Knibbs was the only amateur to go under par on the day, after carding four birdies and a double bogey.

Burrowes is four shots behind, with his opening round two over par 74, with Rocco Lopez and Owen Samuda tied for third from four over par rounds of 76.