Alimony pays off for Nunes 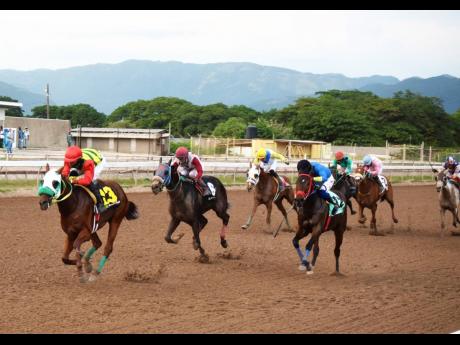 Anthony Minott
ALIMONY (left), ridden by Tevin Foster, wins the night pan, a Restrictive Allowance stakes, for three-year-olds and up over five furlongs round at Caymanas Park yesterday.

On Saturday, Nunes’ SPARKLE DIAMOND made every post a winning one in the nightpan, beating DaCosta’s I AM FRED.

ALIMONY’s length-and-three-quarter victory in 1:01.0 pushed Nunes approximately $2 million clear of DaCosta, who led the stakes race up to two Saturdays ago but caved in when BILLY WHIZZ caught his rival’s FURTHER AND BEYOND in the $6 million Jamaica Cup.

In-form Tevin Foster rode a confident race astride 9-5 favourite ALIMONY, straightening fourth behind leader TRUE BRAVADO, who he overhauled inside the last quarter-furlong.

SUDDEN FLIGHT closed with Dick Cardenas to snatch second on the line from TRUE BRAVADO. DaCosta’s HEART OF THE SEA was chased off the lead by ROCKET LILY and TRUE BRAVADO, straightening third before weakening.

Matthew returned to land the eighth with a stirring rally astride 6-1 chance, DORTHEBUTCHER, outfinishing GORGEOUS GIFT and BETTER BEST, who had collared her a furlong out.

Walker, the out-of-favour six-time-champion rider, who has been quietly striking up a partnership with Philip Feanny, booted home the 14-time champion trainer’s PHOENIX RISEN in the second for two-year-olds at five furlongs round.

Saving his best for last, Walker mowed down rivals inside the last half-furlong of the sixth event to score a 16-1 upset astride LEGAL OPPORTUNITY, beating TRADITIONAL BOY, STICKY DON and QUEEN ADELE.