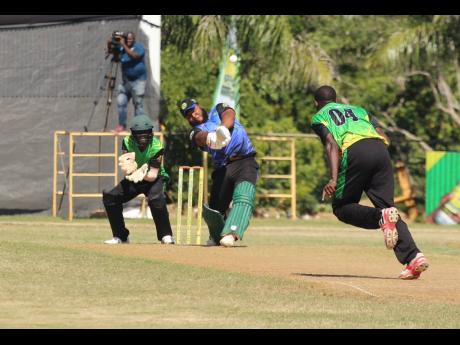 Lennox Aldred
Tristan Coleman (centre) of Fairfield launches a six during their match against Paradise in semi-final one of the SDC T20 competition at the Ultimate Sports Complex in St Ann on Saturday.

It will be a Clarendon and Manchester affair in the final of the Social Development Commission (SDC) National Community T20 Cricket competition this season, following semi-final action at the Ultimate Sports Complex in St Ann on Saturday.

In the opening semi-final, Fairfield United, out of Manchester, defeated Paradise from Westmoreland by five wickets.

Batting first, Paradise posted 116 all out, with former national captain Paul Palmer Jr leading the way with 25 against four wickets for 26 runs from national off-spinner Jamie Merchant. Sheldon Allen chipped in with two wickets for Fairfield, who got to 118 for five, thanks to 36 from Brian Clarke, and 25 not out from Courtney Allen.

It is the first time that Fairfield are making it into the grand finale and their player-manager Clarke says the victory means the world to the team.

“This means a lot for us because it’s the first time and we said at the start of the season that we wanted to be in the final and take this one home,” Clarke said.

Losing captain Rohan James said his team did not put up the sort of score that was expected.

“I am disappointed because the batting this week didn’t click as we expected, but we tried to defend the score and our bowlers did well, but not well enough,” James said.

Santokie, known primarily for his deft bowling, came up big with the bat this time, as his 41 not out carried Race Course to 164 for five, replying to 163 for nine made by Links United.

The left-handed Santokie came to the crease with his team in trouble at 97 for five. However, he and former Jamaica cricketer Dwight Stewart, 27 not out, put on 67 runs for the sixth wicket to take the team over the line.

Demar Duncan chipped in with 34 while Alwayne Simms took two for 40 for Links United.

Earlier, Romario Edwards bagged three wickets for 24 runs for Race Course, despite 37 from 23 balls from Dacthmor Anderson, and 33 from 35 balls from Stephen Alexander.

For Santokie, the victory had added significance for the Clarendon-based team.

“Last week, we lost a dear friend and supporter, and we said we wanted to win this one for him,” he said. “The last two years, we have not reached this far in the competition and we did some things differently by changing up our team and bringing in some experience, and it is that experience that won it for us.”