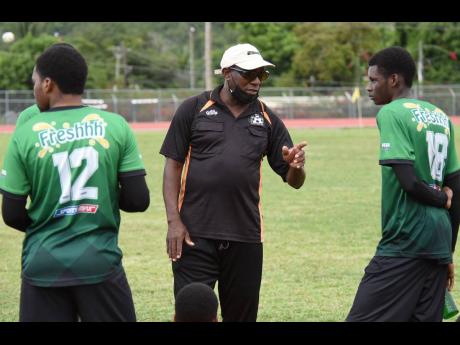 His charges did not disappoint as they battered the ‘Light Blues’ 7-1 in their Group A fixture yesterday at the Ashenheim Stadium, boosting their slim chances of second-round qualification, while effectively ending any hopes the many-time champions had of advancing.

Rushike Kelson fuelled the offence with a first-half hat-trick, scoring in the second, 11th and 45+2 minutes, while Omario Henry and Christopher Ainsworth had braces of their own. Justin Nelson got the lone goal for St George’s in the 20th minute. Laylor said his team displayed the attacking intent he wanted to see, with the knowledge they will battle to the last for a second-round place.

“Well, I can’t say that it didn’t go how I wanted it to. I adjusted some players and they performed to my expectations. We are happy for the victory but we have to keep pressing nevertheless,” Laylor said.

“We play hard until the end of the next game or if we get through to go to the next round.”

Those adjustments made a major difference as Calabar were 3-0 up after 17 minutes before Nelson managed to cut the deficit to two. But it was all one-way traffic for Calabar after that with the team taking a 4-1 lead into half-time after Kelson’s first-half stoppage-time penalty.

St George’s head coach Neville Bell has now suffered back-to-back heavy defeats, the two coming in the space of four days after a 6-0 loss to Jamaica College on Friday. Bell said the same mistakes that doomed them in that loss reared their heads again against Calabar.

“We made it easy for Calabar. People rush us. We expect that, but what you don’t want to do is make it easy for them to,” Bell said.

“When you lose 6-0 and 7-1 it’s hard to say that you should have won the game but I thought that we could have been much better.”

Laylor said regardless of the strength of the St George’s team this season compared to previous years, the players should be proud of taking a major scalp in a competitive group.

“I wouldn’t say that they (St George’s) have the best of quality this year and I wouldn’t want to say that we just took advantage of it, but the team played well. Any team that beat George’s, they are going to take a stripe for that,” Laylor said.

Calabar now have seven points from five games, three points away from Jamaica College, who gave their second-round qualifications chances a boost with a 7-0 thrashing of Kingston High in the early game of the Ashenheim double-header. Jamaica College are now in first place in group A with 10 points with one game remaining.