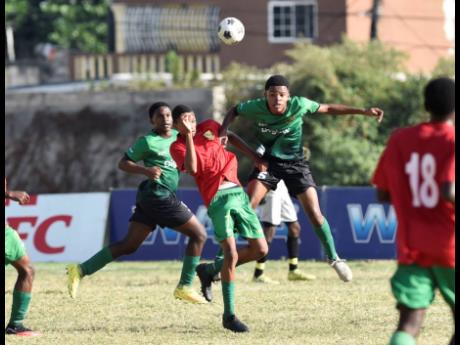 In the feature match, second-place Tivoli Gardens square off against fourth-place Jonathan Grant High at the Spanish Town Prison Oval at noon.

In other games, Group A leaders Kingston Technical High School play Bridgeport High at 3 p.m. at Spanish Town Prison Oval, while Papine High and Clan Carty High both go in search of their first point in a Group C game at Ashenheim Stadium that is set to start at noon.

Camperdown High, the first qualifiers for the second round, sit atop Group B with maximum 15 points from five games. Tivoli follow in second on 10 points, then Excelsior and Jonathan Grant, respectively, on goal difference, with eight points each. St Jago High are next with seven points and STATHS six.

With two rounds of games to go, Tivoli Gardens, who are looking to qualify for the second round for the first time in almost a decade, need a win to stay ahead of the chasing pack.

Tivoli Gardens High’s assistant coach, Jermaine ‘Teddy’ Johnson, noted that all the teams in the group have proven that they are very competitive and they expect a tough match from Spanish Town.

“We just have to be positive and try to go out and get the win. All of the teams in the group are very good teams and they have some very good coaches as well,” said Johnson.

“But if we want to qualify for the second round the only thing we can think about now is a win. So we just want them to go out and be themselves because that is the only way they can show what they can do,” he added.

Excelsior High will be hoping Tivoli lose or both teams draw in order to gain ground.

Although they are strong favourites to get the three points against Jose Marti High, coach Xavier Gilbert is demanding a ‘workmanlike’ performance from his team.

“It is a game we want three points from. It is not going to be easy as these games can be tricky,” said Gilbert.

“This is an important game for us and we have to get three points to stay in contention. We saw what happened to one of the pre-season favourites, Calabar against Kingston High. So teams are going to come and have a good day and that day might be your bad day so we have to be wary about these situations,” Gilbert added.

“We cannot leave anything to chance. We have to come and give a workmanlike performance and try to secure three points.”

STATHS must win, and they also need Excelsior to lose and Jonathan Grant and Tivoli to draw to have any chance of getting that automatic second spot.

In Group A, Kingston High (nine points) will look to edge closer to a second-round spot when they take on Bridgeport High (four points), who also have a mathematical chance for automatic qualification.