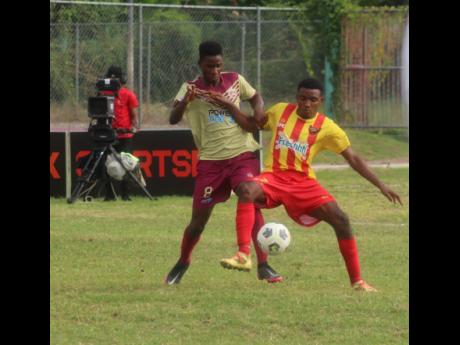 The win put CC in the driver’s seat to secure one of two qualification spots for the quarter-finals if they can come up with a win over cellar dwellers Maldon High on Friday. With 13 points they sit two points behind William Knibb Memorial High who suffered a shock 1-0 loss to a 10-man Holland High in the late game. Herbert Morrison sit third with 12 points.

Davian McLean scored the decisive goal in the 40th minute.

Dr Dean Weatherly, coach of CC, said he was pleased by the way the team managed the game despite the narrow scoreline.

“From the beginning of the game, we had Herbert Morrison on the backfoot but kept pushing. We got the goal and worked hard to maintain it,” Weatherly said.

“Now four clean-sheets in a row is pleasing. We blundered early (in the season) but as you can see, each game we are getting better and better. We have one more game that we must win to qualify and that’s our focus,” he added.

“He is an icon in the Cornwall College community and sports worldwide. He is one that did great things at Cornwall and myself and the entire school look up to,” Weatherly said about the influence Bucknor’s presence has on the team.

When asked if he thought his presence had any effect on the team’s performance, Bucknor dismissed it, but admitted he is happy to see Cornwall win.

“I can’t say that because not many of them know me. The one person I coached in primary school didn’t play today. I can’t say it made a difference, but I’m going to be here for the rest of time so if it had, I hope it will continue,” Bucknor said.

“I’m happy to see Cornwall win but I came here to see a game of football. I was away and came back yesterday just to see this game. Cornwall have done well and hoping that they will go deep in the competition because there is a lot of talent in every department,” he added.

Herbert Morrison’s coach Garfield Anderson accepted his team’s season may be all but over.

“It’s a tough loss. We didn’t want to be in this situation where we don’t have destiny in our own hands. However, it is what it is, we will continue to focus on developing these youngsters. We have come a far way, so I am proud of the boys still,” Anderson said.