Duke fancied for knotty None Such Sprint 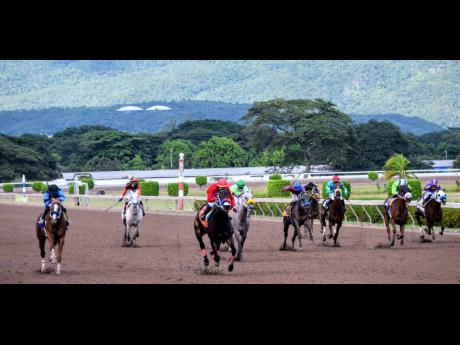 Anthony Minott
SUPER DUPER (centre), ridden by champion jockey designate, Anthony Thomas, begins to pull away from rivals on the way to winning the Pick 3 Straight Trophy over five furlongs straight at Caymanas Park on Saturday.

WHATEVER HAPPENS at the gate will determine the winner of Saturday’s None Such Sprint. SHE’S A WONDER and DUKE traded victories at six furlongs in two meetings because of one factor, they got it terribly wrong at the start of their respective losses.

Both are habitual offenders and will pay the price for any tardiness in a field stacked with speedy form horses, including SHE’S A WONDER’s stablemates, ROJORN DI PILOT and FATHER PATRICK, making the event a tricky one to call.

Should SHE’S A WONDER and DUKE resort to their antics of swerving at the off, the dash could be turned on its head, considering only a short head (no pun intended) separated FATHER PATRICK and ROJORN DI PILOT for second and third, respectively, behind DUKE in the Port Royal Sprint on November 13.

Anthony Nunes’ SPARKLE DIAMOND enjoyed a loping pace down the backstretch at seven furlongs to win his first race in 11 months two weeks ago. However, he, too, has a habit to be slowly away and faces a quicker field, which could leave him flat-footed.

Still, SPARKLE DIAMOND is a classy imported horse, who won in 1:25.2, signalling he could very well be back to his best, considering Anthony Nunes’ decision to have him take on the top sprinters 14 days after beating overnight allowance company.

On paper, DUKE’s 1:12.0 in the recent Port Royal Sprint stands up to better scrutiny than the exact time SHE’S A WONDER had clocked in the I’msatisfied a month ago. SHE’S A WONDER had actually won on a fast track, a time almost equalled by UNRULY BOSS’ 1:12.1 in the day’s opening event. DUKE had got off to a terrible start in the I’msatisfied, tailed off down the backstretch, straightening next-to-last, before closing for a length-and-quarter loss.

Gary Subratie immediately removed the figure eight which he had fitted for the event. Suffice it to say, DUKE responded with a hat-trick of wins, including turning the tables on Parsard’s posse in the Port Royal, clocking 1:12.0 on a surface listed as ‘good’.

However, it cannot be overlooked that SHE’S A WONDER had swerved at the start and, strictly on a handicapper’s rule book, lost absolutely no mark in defeat, running an even race throughout, hardly losing a length on whatever she had spotted the field at the off.

Returning at possibly 112lb with Anthony Thomas, dangerous SHE’S A WONDER is getting 14lb from DUKE, nine from FATHER PATRICK and anywhere from six to seven pounds lighter than SPARKLE DIAMOND with unpredictable Shane Ellis aboard.

The None Such Sprint, because of the habits of the top contenders, is not a race to pluck a banker from. Spread those bets and take all possibilities into consideration. For the brave at heart, superfit DUKE should be the winner, but only on paper.