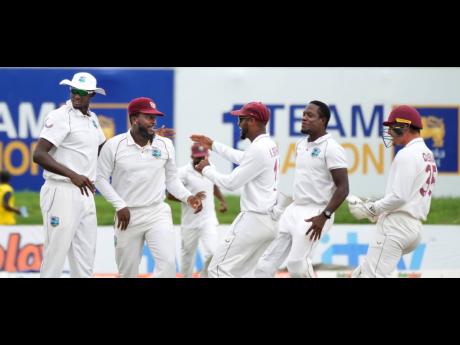 THE WEST Indies, for the first time in the series against Sri Lanka, were on the front foot at the end of day three, following some enterprising bowling on day two, backed up by some resolute batting, in the second Test in Galle.

After restricting the Sri Lankans to 204, the regional side, which resumed on 69 for one, made 253 all out in their first knock. The visitors then came back to snare two Sri Lankan second innings wickets to have the hosts on 46 for two and trailing by three runs with eight second-inning wickets intact.

That resolute batting by the West Indies was set up by a workmanlike knock of 72 by captain Kraigg Brathwaite, 44 from Jermaine Blackwood, 35 from Nkrumah Bonner and 36 not out from Kyle Mayers.

The third day, however, belonged to Sri Lankan off-spinner Ramesh Mendis, who bagged a career-best six for 70, as the touring West Indies lost their last seven wickets for 87 runs.

All in all, 21 wickets were taken in the three days of play allowed and West Indies batting all-rounder Mayers was pleased with the out-cricket displayed by the regional men, as he outlined the key to getting runs on the tricky Galle surface.

“I think the first-innings lead of 50 runs on this surface is good. As you can see, we have the opposition two down with a small lead. To be honest, I don’t think the pitch has any demons. I think you just have to be patient because balls are still spinning, but a bit slow,” said Mayers.

The middle-order batsman said that he, along with the other top-order batters, decided that they would be more patient in their approach, which has borne some fruit thus far.

“I came out with the plan of scoring as many runs as possible and taking little risks, which in the end worked out. Starting on this wicket is very hard, so the key to scoring runs on this pitch is to try to get in and stay in and maximise the time at the crease.”

With the regional side in the ascendency, Mayers is hoping that the Windies can keep up the pressure and drive home whatever advantage he had carved out by the end of the third day’s play.

“We need to keep down the run rate and apply some pressure. We are ahead of the game now and, if we can stop them from scoring and restrict them to the least number of runs, we will be in a good position,” said Mayers.