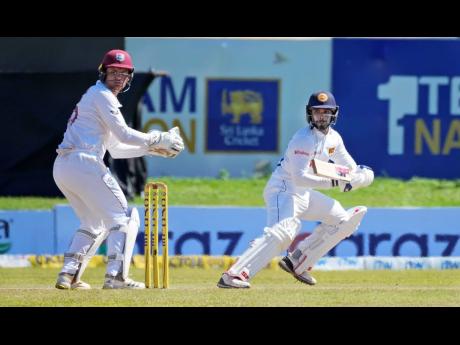 West Indies head coach Phil Simmons had nothing but praise for Sri Lankan batsman Dhananjaya de Silva, who virtually batted the game away from the visitors during fourth-day action of the second Test in Galle, Sri Lanka, yesterday.

The number five batsman came to the crease with Sri Lanka 23 for three in their second innings and went on to hit an unbeaten 153, to leave the home side on 328 for eight, for an overall lead of 279 runs with two wickets in hand.

Any sniff of a West Indies victory bid was snuffed out by the right-hander, who faced 259 balls and hit 11 fours and two sixes in his lengthy vigil at the crease.

The game changer was however in an unbeaten ninth-wicket stand of 107 runs with Lasith Embuldeniya, who is not out on 25.

Left-arm spinner Veerasammy Permaul followed up his five wickets in the first innings with three in the second innings with Roston Chase also chipping in with two wickets.

For Simmons, de Silva’s knock took away any hopes of the team pulling off a win and squaring the series.

“With 98 overs and 300 runs to get, it’s a little bit difficult, especially on a wicket that is going to be turning appreciably,” he said.

“I think de Silva batted well and controlled the game. The wicket wasn’t ragging as much as we thought it would on the fourth day and he took control in the end with a superb hundred and played us out of the game.”

Had the West Indies taken their one chance offered by de Silva, the outcome could have been much different, but Simmons says moments like this will serve the team well with regard to growth.

“You just have to appreciate the fact that sometimes you meet days where people play well,” he said. “We did all that we could do and we fought hard with the bowlers bowling well and we were energetic in the field, but it’s just that de Silva batted well.”