Rangnick off to winning start at Manchester United 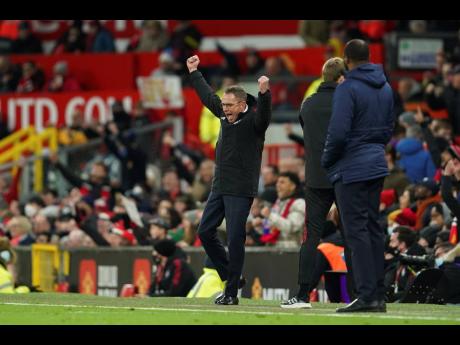 A 90-minute performance of off-the-ball intensity by Cristiano Ronaldo. A rare clean sheet. And something even more unlikely – a goal by Fred, off his weaker right foot.

Ralf Rangnick is already working his magic at Manchester United.

The 63-year-old German led England’s biggest club into a game for the first time yesterday, and his imprint was all over United’s unfussy 1-0 win over Crystal Palace in the English Premier League (EPL) that ended with a chant of “We love you, Rangnick, we do” by home fans toward their new manager who is sometimes referred to as the ‘Godfather of Gegenpressing’.

Indeed, United’s players pressed high and hard in a tweaked 4-2-2-2 formation, with even the 36-year-old Ronaldo showing a work ethic that belied his age.

“Cristiano Ronaldo’s work off the ball, chapeau,” Rangnick said with a smile.

But it wasn’t world football’s most prolific scorer who clinched the hard-fought win to kick off the latest new era at United since Alex Ferguson’s retirement eight years ago.

That honour fell to Fred, the oft-maligned Brazil midfielder whose work rate and endeavour is likely to make him a key member of Rangnick’s line-up this season.

Goals aren’t Fred’s strong point – his only one this season came on the opening day – but he looked something of a natural the way he calmly curled in a finish from the edge of the area with his right foot.

“I had to ask my assistant coach if that was Fred’s right foot,” Rangnick said.

Bruno Fernandes, Fred’s teammate, might have been even more surprised.

“Fred has these moments, one shot per year,” Fernandes said.

With Harry Maguire donning a bandage around his forehead for the final minutes after a nasty-looking clash, United’s defence eked out only its third clean sheet of the season in the league to complete a satisfying first game for Rangnick.

“Overall, I am more than happy. I was positively surprised by the physical state and intensity,” said Rangnick, who was mostly seen patrolling the technical area during the match.

“I didn’t expect them to play on that kind of level after such a short time.”

United jumped up to sixth place and has a nice-looking run of upcoming league fixtures – starting with a trip to Norwich next weekend – to ease Rangnick into his new role.