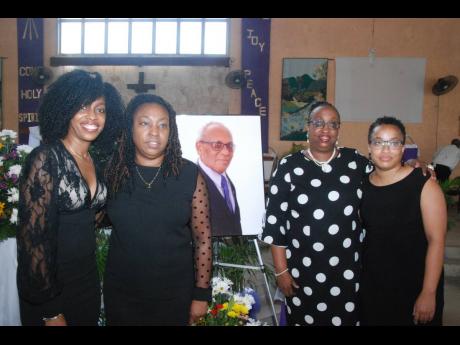 Contributed
From left: Daughters Chevonne Parkes-Williams, Janell Parkes-Walker, Lois Parkes, and Farrah Parkes pose with a picture of their father, the late Wilbert Parkes, after his funeral service at the St Paul’s Anglican Church in Portmore, St Catherine on Friday.

Family, friends, and co-workers of late coach, educator, and administrator Wilbert Parkes remember him as a gentleman, a professional and an educator who went beyond the call of duty.

Parkes was buried at Meadowrest Memorial Gardens in St Catherine on Friday after a funeral service at the St Paul’s Anglican Church in Portmore.

Parkes, who was coach of Campion College for over 30 years, led the school to ISSA Grace Shield schoolboy cricket glory in 1987 and 2015.

“Mr Parkes was a most dedicated teacher, a moulder of character, and an excellent and accomplished sportsman and coach, who emphasised character building in the students,” Reid said.

“He served the school faithfully and well. He loved what he did and he did it with grace and focus. He was a great administrator and he did everything to lift the quality of sports at Campion.”

Reid said that it was a fitting tribute to name the cricket field in his honour.

“As a memorial, the cricket field was named the Wilbert Parkes Oval because there is a man that served the school in many areas, particularly in cricket,” he said. “But that memorial does not only represent sports, it represents character building and complete formation of the students.”

His daughter Lois Parkes said the self-taught journalist was instrumental in the development of local women’s cricket.

“He was one of the first coaches with the Jamaica team and the West Indies Women’s cricket team,” she said. “So the success that the team enjoys today had its foundation in my father’s contribution.

“He was also responsible for various ISSA competitions, and those were well executed and organised.

“He really made an invaluable mark. He was a natural teacher and he loved his students, co-workers, and family.

“I am pleased to know that Campion College and its alumni have taken the time and the resources to rename the cricket field in his honour. His legacy will live on.”

“I have known Mr Parkes since November of 1976 and, when you talk about a professional and a gentleman, you are talking about Mr Parkes,” he said.