Distin on the way up 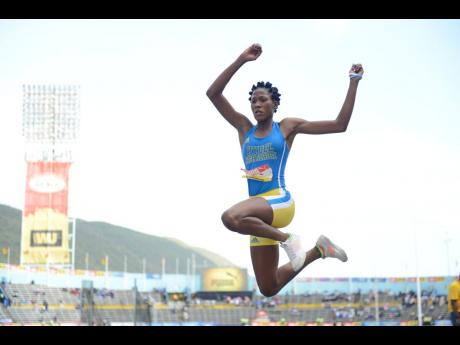 HIGH JUMPER Lamara Distin has started the new United States college indoor circuit where she left off outdoors. Jumping in Arkansas last Friday, Distin snaked over a bar set at 1.86 metres, which is not far from her outdoor best, set earlier this year.

Distin benchmarked a successful evening for Jamaicans at the Woo Pig Invitational in Fayetteville, home of the University of Arkansas. A star for Rusea’s, Vere Technical and Hydel high schools when she was in Jamaica, Distin began jumping at 1.70m and surpassed 1.70m, 1.75m, 1.80m and 1.83m with varying degrees of difficulty. At 1.86 metres, she, however, managed to get over with her first attempt.

She was 11 centimetres clear of her closest competitor.

This result compares with the personal best of 1.90 metres Distin cleared twice outdoors, first for the silver at the National Collegiate Athletic Association (NCAA) Championships representing Texas A&M University and then for the win at the Jamaican National Championships in June. That height placed her third on the Jamaica all-time performance list.

Distin was not the only Jamaican winner at the meet. Former Manchester and Queen’s High School standout Dazsay Freeman won the 60 metres hurdles, and 2019 Hydel team captain Cherokee Young laid down a strong performance over 300 metres.

Freeman, the 2017 World Under-18 100-metre hurdles bronze medallist, edged home in 8.14 seconds, and Young, a member of Jamaica’s Tokyo Olympics team, covered her distance in 37.33 seconds. She trailed Texas A&M teammate Laila Owens at the finish, with Owens clocking the ninth-fastest time of US college indoor history, 37.06 seconds.

Freeman travelled over 300 metres as well, listing at 37.72 seconds.

Jeremy Farr and Joanne Reid, Boys and Girls’ Championships gold medallists for Wolmer’s Boys’ and St Jago High, respectively, kicked off their indoor season as well in Fayetteville. Farr logged the third-place time over 300 metres -- 33.57 seconds; and Reid ended as number seven on the 600-metre list with a strength-building effort timed in one minute, 42.06 seconds.

Another Jamaican reached the top step of the podium at the Clemson Opener Invitational as Marie Forbes, formerly of Vere, launched her shot exactly 19.0 metres. That makes her the number two putter in Jamaican track and field history, behind none other than the outstanding Danielle Thomas-Dodd.

The big throw was no ‘buck-up’ for Forbes, who now studies at Clemson. She had another effort in the same series taped at 18.80 metres.